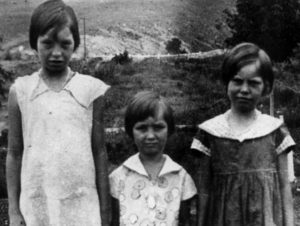 On November 24, 1934, the bodies of three young girls, 8 year old Cordelia Noakes, Dewilla Noakes, aged 10, and their 12 year old half sister Norma Sedgwick were discovered by two hikers John Clark and Clark Jardine, who found them underneath a blanket in the area of South Mountain in Cumberland County, and police quickly determined they had been smothered to death, as they did not show any apparent signs of injury.

Discovery of the girls’ bodies started a nationwide media frenzy resulting in many false leads as to the identities of the girls. Photographs of the children lying on a blanket were printed in newspapers across the country. Thousands came to view the bodies in hopes of identifying them.

Death masks were made before burial to aid in the search for the girls’ identities. Some clothing, towels, and children’s books were found, but labels which may have contained their names had been torn off. Only the name “Norma” was found in one of the children’s books.

Investigators had quickly determined the girls were related and, when a man and woman were found shot to death in Altoona, a day later they began putting the pieces of the story together. Elmo Noakes and his 18-year-old niece, Winifred Pierce, had left California after the family objected to Pierce moving in with Noakes, whose wife had died two years previously.

Noakes apparently ran out of money on their trek east and ended up killing his daughters, Cordelia and Dewilla, and their half-sister Norma, when he could no longer afford to feed them. After leaving the girls’ bodies, Noakes and Pierce drove west, abandoned their car between McVeytown and Altoona and hitchhiked to Blair County.

On November 23rd, Pierce sold her coat, the couple’s last possession. With the $2.55 she received, Noakes bought a rusty .22-calibre rifle from a second-hand store, and a day after the children were found, he used it to kill Pierce and himself. Winifred Pierce had a gunshot wound to the heart and another to the head and Noakes had a single gunshot wound to the head.
Using the description of the car, the physical features of the dead girls, and Elmo Noakes’ fingerprints on military records, the bodies were quickly identified.

A week after their death, the three young girls were quietly buried in the Westminster Cemetery in North Middleton Township, near Carlisle, Cumberland County, not far from where their bodies had been found. The funerals and burials were paid for by the local American Legion Post. Boy Scouts and Girl Scouts served as their pallbearers.