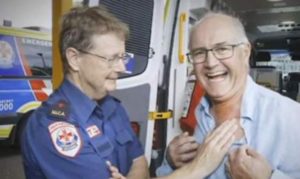 One of the inhabitants of Australia survived a clinical death right in his sleep. His heart did not beat for an hour and a half, and then again began to work.

This incredible event happened in 2019. At that time, an Australian resided with his wife in a beach house. At night, his wife repeatedly woke up from the fact that the man was snoring very loudly.

But she soon realized that the sound had ceased to repeat. The woman tried to wake her husband, but found that his heart stopped.

She immediately called an ambulance and tried to independently help the man. For an hour and a half, the doctors did everything possible to make Elister’s heart work again, but all their attempts did not bring any result.

Just a few minutes after that, the 59-year-old man woke up. For four days, Elister was under the constant supervision of doctors in the intensive care unit.

Experts noted that despite the fact that his heart did not beat for a very long time, the man has no deviations from the norm in terms of both physical and mental health.

Soon, Elister was set up with a pacemaker to avoid similar cases of sudden cardiac arrest in the future.