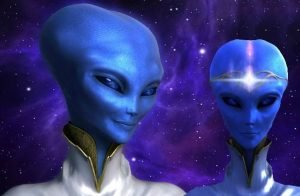 The Arcturians are the guardians of our galaxy and are helping humans transcend into the next dimension. Here are a few of the facts we know about them.

When we think of God, we often imagine a single architect responsible for all the known and unknown constructs of the universe, and while this concept is fairly intuitive and plausible at the same time, there is still plenty of room left for other deities or lesser gods in this equation.

So, before searching for the all-powerful, all-knowing designer of the universe, we first have to go through hierarchies of lesser entities which are governing this Earth and galaxy.

Earthlings have pledged allegiance to many deities over the past millenia, and in exchange for their loyalty, these superior beings have been shaping our evolutionary path accordingly.

We now refer to them as “aliens,” although in the past they had many names and titles. Evidence of their otherworldly implication is found scattered across the entire globe, although mainstream beliefs fail to credit their deeds directly.

The alien hierarchy determines the level of implication each specie is allowed to exert.

There is of course the battle of good and evil dividing the camps, but most aliens abide to the rules and stick to their part of the bargain, constrained by fear of holy wrath that can be cast upon them by the more evolved alien species, just like the story of the fallen angels from the Book of Enoch that had been cast away in Tartarus after wreaking havoc on Earth.

Today we’re going to discuss the Arcturians – a highly evolved species of ETs that are taking care of the Milky Way galaxy. They have transcended to the 4th and 5th dimensions and have developed etheric bodies able to pierce through time and space.

The one who made known to us this benevolent species of evolved aliens is Edgar Cayce, the most renowned psychic of the 20th century, also known as the “sleeping prophet” for his accurate psychic “readings” of the afterlife, as well as his ability to find remedies to people’s illnesses.

After communicating with the Arcturians telepathically, Cayce was bestowed with precious knowledge about their origins, nature, goals and ideology, which he further shared with the rest of the world.

These masters of the galaxy are the most evolved life-form around, having ascended to the 5th dimension due to their spiritual advancement, and because of their otherworldly intellect, they have fully mastered the technology.

Although they have fancy starships, they often reside inside a spiritual plane, and can freely move between other dimensions. They are the healers of this galaxy, with love being the center piece of their philosophy.

They are guided by their elders who have the highest level of spiritual advancement. During their lifespan, which is typically between 350 to 400 earth years , they constantly enhance their spirit to ascend to other levels of existence far surpassing our imagination.

So how do these evolved alien beings look like? They range from three to four feet in height, with blueish green skin tone, and the classic broad oval eyes. They have just three fingers per limb and can do wicked things using just their minds. That’s about their natural form, but since they are masters of the Milky Way galaxy, they can shift to their etheric state when transiting between realms.

During their lives they undergo a powerful spiritual journey. They protect earthlings from other harmful ETs and are preparing us for the leap into the 4th dimension which comes as a result of sufficient spiritual development, a feature tremendously ignored by modern-day humans.

Arcturians don’t normally feed like earthlings do, but instead devour all forms of positive energy. They have the most advanced intellect and remain the most caring and loving species of ETs.

They come from the Bootes constellation, from a planet that’s yet to be discovered by our astronomers. They harness the energy of their star -Arcturus- the third brightest star in the observable night sky, just after Sirius and Canopus.

The Arcturians can be viewed as our evolved selves, since any human is believed to be able to ascend to these higher states of existence. Due to this, earthlings are deemed as Proto-Arcturians, meaning that we are able to reach the same Arcturian state if we survive long enough and go through all spiritual trials.

They have established a close connection with the Ascended Masters, or the Brotherhood of the ALL, and they are responsible for helping juvenile species in the galaxy to experiment unbiased divine and godly connections.

Their technological advancement far surpasses anything designed by human hands. They have some of the most advanced starships in which they travel and patrol the galaxy. Foul alien species have less chances of producing harm when the Arcturian protectors are nearby.

In one of their ship’s sections they keep a portal connecting any crew member depleted of powers to their source-star Arcturus. During this process, they travel in their etheric form and undergo nourishing procedures which bring their powers to full capacity.

Another section holds a digital library comprising data about all planets in the Milky Way and life forms populating them. Although they are organic beings just like us, they can assimilate and process information at least a hundred times faster than earthlings. For them having such broad access to information is truly a delight because they enjoy information just like humans enjoy a fat hamburger.

There’s also a room on their vessels which amplifies their vibration in order to withstand Earth’s unstable vibration field.

The Arcturians have built bases on our planet, particularly in secluded mountainous regions, but also on the surface of the Moon. From these strategic spots they carry important operations where they revitalize Earth’s energy points that have gone inactive.

Through channeling, they have reached the star seeds of this planet and have enabled the spiritual growth process for human beings. The Arcturians have expressed their sympathy towards us and are committed to linking us to the divine source of energy from which all our powers spring from.

These masters of the galaxy are maintaining order and are preaching universal love. Because of their position at the top of our galactic hierarchy, they are only able to intervene in our evolutionary process by sending us telepathic guidelines.

It’s up to us to intercept these messages and steer our lives in the right direction. However, various other malevolent alien species are also interfering with earthlings, all wanting their cut of the share of what humans have to offer.

And if you’re wondering what’s the precious resource these aliens want…well, it’s our vital energy from which they feed, because the parties opposing the Arcturians are all vampiric entities.

The dormant state in which humans are found now has turned them into unsuspecting prey for the vile aliens. However, since our vital energy is derived from the source, we are able to overcome all forces of evil, but only if we join forces with the Arcturians who want to guide us safely to the light, and eventually into greater existential realms.

But how do we all know this? Over the centuries, many people have met aliens on Earth. From alien abductions to legends and myths, we can create a picture that tells us the truth.

It’s up to each of us to pick a side.