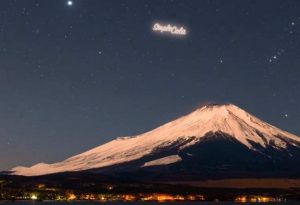 A Russian company works with a constellation of small satellites to create the world ‘s first space billboard.

You can’t go anywhere these days without at least seeing some form of advertising and now the Russian startup company StartRocket wants to take things one step further by using a satellite system to create glowing advertisements in space that can be seen from the ground at night.

There is no denying that the sky is a true blank canvas of advertising potential-imagine looking out of your window and seeing the word “McDonald’s “floating hundreds of miles above you.

As things stand, StartRocket aims to have its equipment ready for use by 2020 and will shortly thereafter offer contracts to business customers.

“We’re ruled by brands and events,” says Vlad Sitnikov, project leader. “Economy is society’s blood system–entertainment and advertising are at its heart.”

“We will live in space and mankind will begin to bring its culture into space.”

But not everyone is so enthusiastic about the idea, critics argue that the satellites not only add to the increasing amount of space junk in orbit, but also interfere with astronomical observations by polluting the night sky with unnecessary sources of light.

“If you ask about advertising and entertainment in general – haters gonna hate,” said Alexey Skorupsky, a team member.

“We are developing a new medium. At the advent of television, no one loved ads at all.”