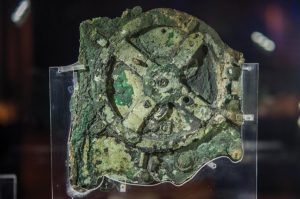 The Antikythera mechanism was found at the site of a shipwreck off the coast of a Greek island Antikythera. The wreck itself was found by sponge divers in April 1900 while looking for clams for a meal.

The divers reported their find to officials and eventually archeologist were sent to retrieve the artifacts from the wreck. Among the artifacts retrieve were misshapen corroded pieces of bronze which would remain unnoticed at the National Archaeological Museum of Athens for fifty years before kindling any interest in the historians.

Two years passed before the bronze pieces received any significant notice in 1902. Archaeologist Valerios Stais examine the pieces and noticed what appeared to be a gear protruding from the encrusted coral.

Stais was the first to suggest that the device was some type of astronomical device. But scientist at the time rejected the idea thinking that the device of a more modern origin and had somehow become mingled in the wreck.

Finally in 1971 physicist/historian Derek John de Solla Price became interested in the artifact. Price enlisted the help of nuclear physicist Charalampos Karakalos to perform radiography on the artifact to peer inside.

What they found astonished them. They were seeing a complex devise of gears, dials, and inscriptions. But this type of archaeological investigation was in its infancy at the time and only provided a hint at what was to come.

Scientists had to wait least another 40 plus years for technology to develop means to further reveal the secrets of the artifact. It was not till recently with the development of 3d xray scans and high-resolution imaging for enhancing the faded inscriptions on the surface that the device could be understood.

We now know that the corroded pieces of bronze were once a small complex bronze analog computer that was built at least two thousand years ago. The device had more than thirty gears behind its dials and can be easily termed as one of the most advanced technological artifacts to be developed in the pre-Christian era.

The size of the Antikythera mechanism would have been about the same size as that of a mantel clock. The device was probably boxed inside a wooden case (with a large circular face and rotating hands) as indicated by the bits of wood that were found on the pieces recovered from the shipwreck. It also consisted of a handle on the side for operating the device. Turning of the handle drove a train of interlocking gearwheels and a minimum of seven hands at different speeds.

The various pointers depicted the position of the Sun, the Moon and the five planets Mars, Mercury, Venus, Jupiter and Saturn that can be seen by naked eye. The moon’s phases were represented by a rotating silver and black ball. Inscriptions provided information about the rising and setting of stars on any specific day. The two dials on the back side of the case represented a calendar for solar and lunar eclipse timings.

This meant that the device provided a great deal of astronomical information. Some researchers believe that the mechanism was possibly used for teaching astronomy but more likely it was used for astrology. Remember this is a time when astrology and astronomy were the same study.

With a simple turn of the dial astrologist of the time could view planetary alignments for any given day and time and then use these in their predictions. This along with its ability to predict portents such as solar and lunar eclipses most likely made these incredibly valuable devices.

The international effort Antikythera Mechanism Research Project supported by various universities and private companies continues to this day to unlock the secrets of the device. One revelation is that though the Antikythera mechanism may be the only known artifact of its kind there may be waiting to be discovered. Contemporary writings of the time make mention of such devices. In fact, it is believed that Archimedes of Syracuse, a very famous inventor, had designed and built several such devices.

This piece of lost ancient technology still astonishes and fascinates scientist to this day. It illustrates more than anything the gaps in our understanding of ancient history. Certainly it challenges or image of the ancients accomplishing everything with simple tool such as hammers and chisels.

Currently, the mechanism is on display at the National Archaeological Museum, Athens, among the Bronze Collections. The American Computer Museum in Bozeman, Montana, also displays a reproduction of this mechanism.