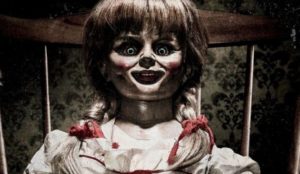 Most people have heard of the evil possessed doll Annabelle that now resides in the Warren’s occult museum thanks to the movie The Conjuring, although Director James Wan redesigned Annabelle for the movie, giving her a much more disturbing appearance, Annabelle was in reality just your run of the mill Raggedy Ann doll.

In 1970, a mother purchased an antique Raggedy Ann Doll from a hobby store, the doll had been a birthday present for her daughter, Donna, who was preparing to graduate from college with a nursing degree. She lived in a tiny apartment with her room mate, Angie who was also a nurse. At first neither of the girls thought the doll was anything special and didn’t really give her a second thought.

But over time they noticed Annabelle seemed to move on her own, at first it was really subtle, just changes in position, the kinds of things that could be written off as the doll being jostled. But the movement increased, and within a few weeks it seemed to become fully mobile. The girls would leave the apartment and come home to find the doll in a completely different room. Sometimes the doll would be found with legs crossed,arms folded, other times it would be found upright, standing on its feet. Several times Donna sometimes left the doll on the couch before leaving for work, and would return to find the doll back in her room on the bed, and with the door closed behind her.

A friend of the girls called Lou hated the doll. He thought there was something deeply wrong with it, something evil, but the girls were modern women and didn’t believe that sort of thing, thinking there must be a logical explanation for what was happening. But soon Annabelle’s actions got even weirder, and Donna began to find pieces of parchment paper in the house with messages written on it. “Help us,” they would say, or “Help Lou.” Just to make the whole thing that much creepier nobody in the house had parchment paper. The escalation continued and one night Donna returned home to find Annabelle in her bed, with blood on her hands.

The blood (or some sort of red liquid), seemed to be coming from the doll itself. That was enough for Donna who finally agreed to bring in a medium. The sensitive sat with the doll and told the girls that long before their apartment complex had been built there had been a field on that property. A seven year old girl named Annabelle Higgins had been found dead in that field. Her spirit remained, and when the doll came into the house the girl latched on to it. She found Donna and Angie to be trustworthy and just wanted to stay with them. She wanted to be safe with them.

With both girls being sweet, nurturing types, Donna and Angie agreed to let Annabelle stay with them. And that’s when all hell broke loose. Lou started having bad dreams, dreams where Annabelle was in his bed, climbing up his leg as he lay frozen, sliding up his chest to his neck and closing her stuffed hands around his throat, choking him out. He would wake up terrified, head pounding like all blood had been cut off to his brain. He was freaking out. He was worried about the girls.

A few days later he and Angie were hanging out, planning a road trip, when they heard someone moving around in Donna’s room, thinking they might have an intruder, Lou crept over to the door, listening to rustling within. He threw open the door and everything was as it should be, all except Annabelle that is, who was off the bed and sitting in a corner. As he approached the doll Lou was consumed with that feeling that somebody or something was staring at him, and he spun around. Nobody was there, the room was completely empty.

And then suddenly he felt pain on his chest. He looked in his shirt and saw a series of raking claw marks, rough ditches in his flesh that burned. He knew Annabelle had done it. The weird claw marks began healing almost immediately however and they were totally gone in two days. They were like no wounds any of them had ever seen before. They knew they needed more help, and they turned to an Episcopalian priest, called Father Hegan. Father Hegan felt it was a spiritual matter and felt he needed to contact a higher authority in the church, so he contacted Father Cooke who immediately contacted the Ed and Lorraine Warren.

It didn’t take the Warrens long to come to their conclusion, there was an inhuman spirit, a demon attached to the doll. But they warned that the doll wasn’t possessed, demons don’t possess things, only people. It was clinging to the doll, manipulating it, creating the illusion of it being alive in order to get recognition. The spirit was not looking to stay attached to the doll, it was ultimately looking to posses a human host, which was Donna.

Father Cooke although uncomfortable with his role as an exorcist agreed to perform an exorcism on the apartment and the Warrens took possession of the doll. They put it in a bag and began the long drive home; Ed agreed to stay off the highways because there was a concern that the demon might mess with the car, and at 65 miles an hour that could have disastrous consequences. And sure enough, as they drove on the back roads, the engine kept cutting out, the power steering kept failing and even the brakes were giving them trouble.

Ed opened the bag, sprinkled the doll with holy water and the disturbances stopped, at least for the moment.

Ed left the doll next to his desk, and it began levitating. That happened a couple of times and then it seemed to just stop, finally laying quiet. But in a couple of weeks Annabelle was back to her old tricks, she started appearing in different rooms in the Warren home. Sensing that the doll was ramping back up the Warrens called in a Catholic priest to exorcise Annabelle. The priest didn’t take it seriously, telling Annabelle “You’re just a doll. You can’t hurt anyone!”. But on his way home the priest’s brakes failed, and his car was totaled in a horrible accident, fortunately he survived the accident.

When the Warrens were away and had the doll locked up in the outer office building, they would often return to find it sitting comfortably upstairs in Ed’s easy chair when they opened the main front door. The doll also showed a hatred for clergymen who came to the house.

Eventually the Warrens built a locked case for Annabelle, and she resides there to this day in the Warrens occult museum. The locked case seems to have kept the doll from moving around, but it seems like that whatever terrible entity is attached to it is still there, waiting, biding its time, ready for the day when it can again be free to cause havoc.

Since the case was built Annabelle no longer appeared to move but she is thought to be responsible for the death of a young man who came to the museum on motorcycle with his girlfriend. The young man after hearing Ed’s account of the doll, defiantly went up and began to bang on the case insisting that if the doll can put scratches on people then he wanted to also be scratched, Ed said to the young man “Son you need to leave” and put him out of the building.

On the way home the young man and his girlfriend were laughing and making fun of the doll when he lost control of his motorcycle and went head on into a tree, the young man was killed instantly but his girlfriend survived and was hospitalized for over a year. When asked what happened the young woman explained that they were laughing about the doll when they lost control of the motorcycle.