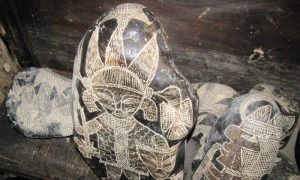 The Ica stones are a collection of out of place artifacts that were discovered in a Peruvian cave, close to Ica are often included collections of paranormal topics. The stones are not just decorative pieces of artwork common to the era.

There are also drawings of men with dinosaurs and other, now extinct animals. Others depict many modern processes and technologies such as telescopes, maps, flying machines, telescopes, brain transplants and open heart surgery.

These stones are shrouded with mystery – no one is sure just what they were what their purpose was or even how old they are. The consensus is split, there are groups claiming that it is a library of knowledge belonging to an ancient civilization whereas others are certain that it is just an elaborate hoax.

If they do turn out to be real, then it calls in to question our knowledge of the history of our ancestors.

This astounding discovery was popularized by the late Dr Javier Cabrera. He received one of these objects in 1961 as a birthday gift. This intrigued him greatly, and led to him devoting many years studying the artifacts and building up an impressive collection.

This passion and interest led to him opening the Engraved Stone Museum (Museo de Piedras Grabadas) in Ica, the place where the stones were originally discovered. Over the course of his life he managed to build up a collection of over 15000 pieces.

There was a lot of controversy involving the farmer who found these stones. Seeing that the stones were very ornate, he decided that he would sell them to visitors to the area. The man would have faced 20 years in jail if these artifacts were real, so he told police that they were fake items.

Many believe that these items were real and that the farmer only changed his story to get out of jail. This seems to be the most likely explanation for a number of reasons. Firstly, the man would have said anything to get out of jail and secondly it isn’t possible for one man to make over 15000 of these stones without being noticed. 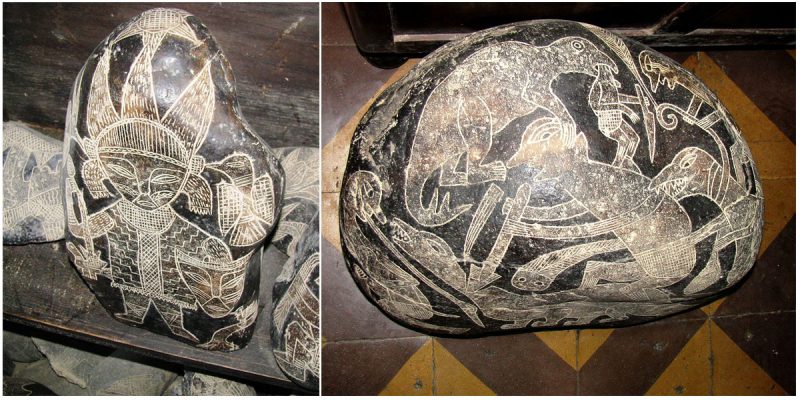 Cabrera also claims that local villagers found somewhere in the region of 50000 stones and were able to bring him to a tunnel that supposedly contained another 100000 stones. This further lends credence to the explanation that these were actually an ancient library of knowledge.

There is a lot of debate in regards to the age of these objects. Since they are non organic and do not contain any Carbon-12 or Carbon -14 atoms, it is impossible to carbon date the items. In addition to this, the location of the cave in which the rocks were found has been lost. Most experts in the field believe that the rocks are between 1500 to 12000 years old.

Cabrera however, thinks that they are of a far greater age. He believes that they are in fact objects that date from 60000000 BC to 13000000 BC. In addition to this, he was convinced that these stones depict an extraterrestrial civilization that visited earth during the time when dinosaurs were still alive, and that they genetically engineered modern man to be the way we are today.

However the most pressing question is are they real or are they fake? There is plenty of evidence to support both theories. Firstly, I will go through the evidence that shows them to be fake. Firstly, it has been proven that some were indeed made by the locals to sell to tourists.

This is known because of the nature of the rocks. Upon analysis of photomicrographs of the rocks scientists have found traces of modern paints and other materials. In addition to this, they also found that the level of erosion on the rocks was very low for their supposed age.

In 1998, after a thorough examination of the evidence a Spanish investigator named Vincent Paris declared that the items were a hoax. Based upon the evidence that he was presented, this seems like a logical conclusion.

On the other hand, there is a lot of evidence to support the theory that they are indeed ancient artifacts. Both Inca myths and the Christian and Jewish bibles tell of there being an ancient civilization.

According to the bible they were giants named the “Nephilim”. There are numerous theories’ that suggest that they were an Extraterrestrial race of beings. This is the theory that Cabrera supported.

Another piece of evidence supporting this is that during the 16th century Spanish explorers brought some of these stone back to Spain, ruling out the possibility that they were created in modern times.

Furthermore there also the fact that it isn’t logistically feasible for a single farmer or even a group of people to make these items. Not only would it have required large amounts of time and materials, but they would also needed to have an expansive knowledge of many complicated things such as blood transfusions, the anatomy of extinct species and sophisticated technology.

Whether you believe they are true or false, it is undeniable how large the impact on our understanding of ancient history would be if these did prove to be true.

In Search Of Hyperborea: Russian scientist finds Paradise at the North Pole