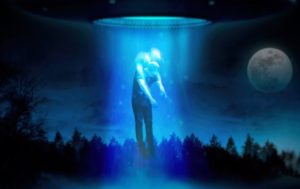 Whether you believe it or not, the following story is a fascinating one. Perhaps one day the governments of the world will tell us what they know… if they know.

But we must adhere to the fact that there are many UFO and alien encounters observed by credible eyewitnesses of different professions around the world e.g., fighter pilots, commercial pilots, military personnel, former presidents, astronomers, astronauts, and yes, by police officers like Herbert Schirmer.

It was a cold night on December 3rd, 1967 and it was especially cold at 2:20AM in Ashland Nebraska. 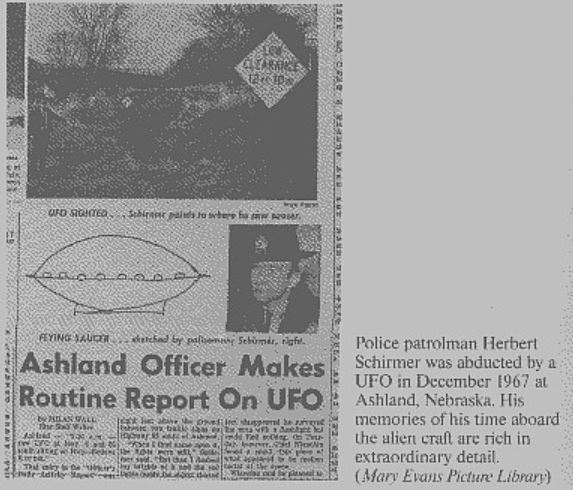 Herbert Schirmer was a young, 22 year-old patrolman making the usual rounds. The streets were pretty much empty, the local businesses were all closed. Everyone was tucked in beds covered in blankets. He passed by the only open business this late at night, a gas station on highway 6. There were, as usual, no customers.

He then noticed something odd in the distance. It looked like red lights flashing upon a large truck. Was it an ambulance? A tow truck? What had happened? He drove down highway 63 until he came upon the scene with his headlights now flicked on to high beam. It was definitely not a truck.

The red lights he had seen flashing were coming from oval-shaped portholes cut into what appeared to be a metallic, oval-shaped object that was hovering about eight feet above the road’s surface.

With a high-pitched whine and blue flame coming from underneath, the UFO rose and zoomed off, leaving an openmouthed Schirmer to stand and stare. He was surprised to find that a half-hour had elapsed—it seemed like only 10 minutes. He began to feel sick and noticed a red welt under his ear.

He looked out his window and in his mirrors but noted that the object was so fast, he did not know where it went. Deciding not to call it in, but because of what he saw, he returned to the police station. 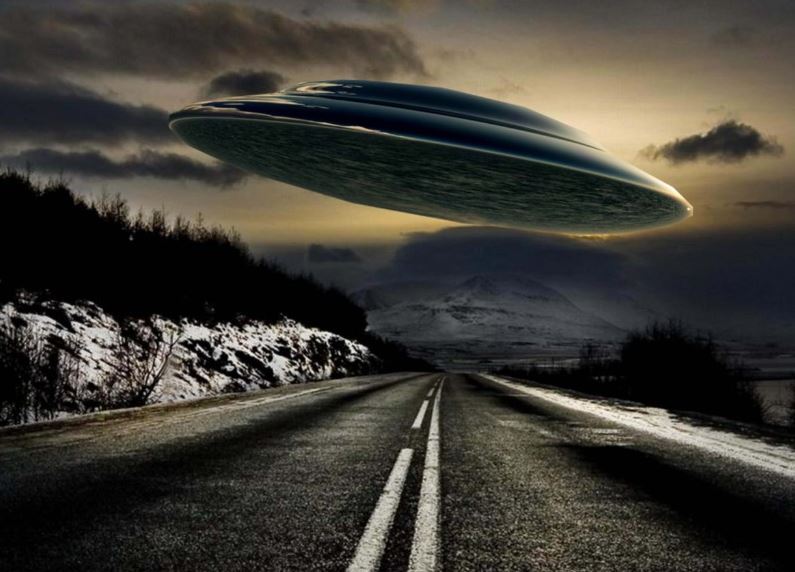 He drove back and within minutes arrived at the station to make his report. He glanced at the station clock to note the time. It was 3AM and he was baffled that it took him, what he believed to be mere minutes to arrive back at the station, yet, all the clocks indicated time had passed.

He decided that he would not return back to duty until the next day.

Months passed and word got to the US Airforce that a patrolman had seen a flying saucer and that his eye-witness testimony was valid. The Condon Commission at the University of Colorado, who was tasked at the time to investigate and mostly discredit UFO reports asked him to come to Boulder Colorado to retell his UFO encounter.

His case was one of those investigated in the Condon Report. He flew to Boulder, Colorado and a psychologist hypnotized him, and he remembered that aliens had emerged from the craft. He was examined under hypnosis by psychologist Dr. R. Leo Sprinkle of the University of Wyoming on February 13, 1968.

Under hypnosis he reported that he had seen a blurred white object that came out of what he had at first mistaken for a truck because of blinking red lights. The white object communicated mentally with him, preventing him from drawing his gun.

They were about five feet tall, had long, thin heads, slitlike eyes that never blinked, flat noses, and no lips. They were seeking power from a nearby power plant. Schirmer was given a tour of the ship and was told that the beings were from a nearby galaxy and had bases on Venus as well as on earth, off the coasts of Florida and Argentina.

The beings were friendly and wanted to help humans, they said, but were waiting until earthlings were more accustomed to the idea of extraterrestrials before they came out in the open. Schirmer was told by the leader to say nothing about what he had seen and that he would be contacted again twice. When they left, Schirmer remembered nothing. 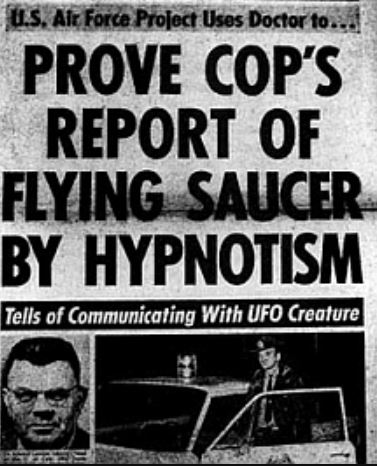 An interesting detail in this case is Schirmer’s report of winged serpents depicted on the space suits. At least three other close encounters describe the same or similar emblem. It is especially strange because a winged serpent is a familiar image in earthly mythology.

The commission’s conclusion was “Evaluation of psychological assessment tests, the lack of any evidence, and interviews with the patrolman, left project staff with no confidence that the trooper’s reported UFO experience was physically real.” Sprinkle thought Schirmer believed what he was saying and was not consciously inventing the story.

When Schirmer returned to his duties in Ashland, Police Chief Wlaskin resigned, and Shirmer was appointed as the new police chief. But when the townspeople ridiculed Schirmer because of his UFO experience, they hanged him in effigy as an expression that they didn’t believe him.

His patrol car was subsequently dynamited, his tires were slashed, and a windshield was broken on his car. To exacerbate his misfortune, his wife left him.

He stated, “I would give somebody a traffic ticket and they would look at me and laugh, and tear up the ticket. What could I do?”, Schirmer stated in an interview at his home.

Due to that, he was unable to rightfully perform his duties and resigned two months later. But despite the ridicule and the misfortune, Schirmer has stubbornly stuck to his story since 1967 and feels he is ready to tell it to the world no matter what.

Looking for relief from his psychological problems, he would undergo more hypnotic regressions on June of 1968. Hypnotist Loring G. Williams conducted the sessions, which would reveal many more details of his encounter with the UFO. There would be two books written about his experiences, “Gods, Demons, and Space Chariots” and “Gods and Devils from Outer Space” by Eric Norman.

How Many Aliens Do We Have?