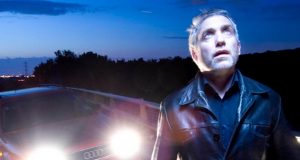 Alan Godfrey is a retired police constable who served with the West Yorkshire Metropolitan Police Force.

His life and career are notable for having been entangled in some of Britain’s most unusual mysteries, including the Zigmund Adamski case, allegedly connected with the UFO phenomenon.

His alleged UFO encounter took place during one of the most active waves of UFO sightings in British history. He is considered by some ufologists to be one of the first alien abductees in Britain. Ufologist Jenny Randles has claimed that the Alan Godfrey case cemented the Pennines as the central hot spot of UFO activity in Britain, and possibly in all of Europe.

Godfrey had led a fairly normal life prior to his alleged UFO encounter. He was married with two children. He was commended twice by the police force for his investigative work in cases of sudden and mysterious death. The only incident reported prior to the investigation of Zigmund Adamski’s body was a scuffle with 3 unruly men on the day of October 23, 1977.

Godfrey was attempting to take the men into custody on the grounds that they had brutally assaulted someone the night before. However, they resisted arrest, beating him to the ground and wounding him severely. He would later lose a testicle as a result of being kicked in the groin. He was told by his doctor that he would no longer be able to lead a normal sex life or father children.

Alan Godfrey was one of the two officers to inspect the body of the deceased Zigmund Adamski. Adamski’s body was found lying on a heap of coal in Tomlin’s coal yard in the town of Todmorden at 15:45 on Wednesday June 11, 1980. Godfrey’s inspection revealed that the body had been crudely dressed: he was wearing an overcoat and a vest, but no shirt.

His jacket was fastened unevenly, the fly of his trousers was unzipped, and his shoes were not tied properly. Godfrey thought that the shoes seemed as though they had been placed on Adamski’s feet by someone else. The forensic inspection of the body revealed that he had died of a heart attack, and had been dead for at least 8 hours before the police arrived.

There were other unusual circumstances as well: Though Adamski was found at the top of a pile of coal, no scuffs or traces of coal dust were found on his clothing or skin, nor were there any signs on the coal itself to suggest that he had climbed to the top of the pile. Furthermore, strange burn marks were found around the back of his head, and another on the back of his neck that was covered in an unknown gel-like substance.

Neither the burn marks nor the substance were ever identified. It was concluded that Adamski had been missing for six days prior to the discovery of his body. Godfrey was tasked with investigating the case (thought to be a homicide), but was not able to ascertain what had happened to Adamski.

The investigation into the death of Adamski was dropped later that year, and a security clampdown forbade officers from speaking to the press. Reflecting on the case in 1993, coroner James Turnbull claimed that the case absolutely mystified him. He also expressed some willingness to believe, along with popular speculation, that a UFO had been involved. The case remains unsolved.

Within six months of discovering Adamski’s body, Godfrey was given another, seemingly less pressing, assignment. The police station had been receiving multiple calls from concerned citizens regarding a herd of cows that had allegedly been appearing and reappearing on a local council estate.

On the night of November 28, 1980, Godfrey was dispatched to investigate. He was driving his car down Burnley Road when he spotted something down the way ahead of him. Thinking that it was a double-decker bus that had skidded sideways on the road, he turned on his police lights and moved in for a closer inspection. When he got within 25 yards of the object, he realized that it was not in fact on the road at all; it was hovering approximately five feet off the ground. Not knowing how to proceed, he tried calling for backup in the car radio, only to discover that it would not function. His personal radio was also “completely dead.”

Godfrey recalled that the object appeared to have been emitting some kind of force capable of disrupting the trees on either side of the road, yet it made no noise whatsoever, nor could he feel any vibration in the police car. For safety reasons, he remained in the car and proceeded to sketch the object in front of him in a notepad he kept in the vehicle. He described the object as a diamond shape, with the bottom half rotating and the top sitting stationary.

Soon after finishing the sketch, he reported a “jump in time”; he suddenly found himself driving the car again, approximately 20 or 30 yards past the point at which he met the object. Confused as to what had just happened, Godfrey turned the car around and inspected the area in which it had rested.

He found that the road was perfectly dry where it had hovered, despite the fact that the entire area had been dampened from the rainfall that night. Despite initial scepticism, Godfrey later came to believe that the he was the victim of an alien abduction.

Godfrey returned to the station to retrieve two fellow officers in an attempt to continue the search for the missing cattle. They managed to find them in a field, to which the only point of access was across a bridge and through a locked gate. There was no sign of the cattle having walked there themselves, despite the ground being wet and easily disturbed. Godfrey insisted that the only way the cows could have gotten there was for them to have simply been dropped on the spot. 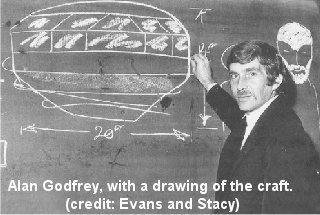 Upon returning to the station, Godfrey also noticed that there was approximately 30–35 minutes “missing” for which he could not account. While he claims his trip down Burnley Road should have only taken him 15 minutes, he had been gone for approximately 45–50.

He also noticed several other things for which he had no rational explanation; an itchy but painless mark had appeared on his foot, and his boot had been split horizontally on the sole. The next day, he also discovered that three other officers had reported seeing strange lights at the time of Godfrey’s encounter.

Godfrey reported the occurrences as per standard police procedure, despite some ridicule from colleagues. He soon found that the story had been leaked to the press, much to the embarrassment of the department and his family. Godfrey maintains that the department, uncomfortable with his newfound notoriety, pressured him to resign through such tactics as replacing his car with a bicycle. Godfrey no longer works for the Police Service.

At some point after the UFO encounter, Godfrey’s wife was awakened by a strange noise outside the house while the two of them were in bed together. Despite her best efforts, she was unable to wake Godfrey. The next morning, they had sex for the first time since the beating of 1977, an act which resulted in the pregnancy of Godfrey’s wife.

Godfrey was told that his condition had somehow reversed, and maintains the belief that “the visitors” he encountered on the night of November 28, 1980 served some sort of positive function in his life.

Godfrey was later convinced to undergo hypnotic regression in order to attempt to recall what had transpired during the ‘jump in time’ he had reported upon encountering the UFO. Despite initial reservations, he conceded.

During the session, he claimed that the UFO had stopped his car engine, filled his radio with static, then blinded him with an intensely bright light which caused him to lose consciousness. His next supposed memory was being inside a room that looked very much like that of a regular house.

There was a large black dog in the room, and a heavily bearded men assisted by several small, robot-like creatures with heads shaped like lamps. The bearded man, dressed in “biblical” clothes, communicated with Godfrey telepathically, revealing that his name was “Yosef” and that Godfrey already “knew” him. Yosef promised him a later encounter.

Godfrey still has no conscious recall of the supposed abduction, and is unsure whether what he ‘recalled’ during the hypnotic session was fact, fantasy, a dream, or a mixture of all three.

The Search for “E.T.” Is Anyone Else Out There?