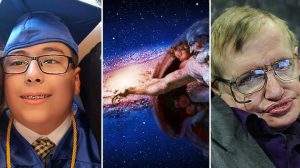 William Mailis is a genius. At 7 months he already spoke in full sentences. Shortly before his second birthday, the boy added up the numbers, and by the age of 2 he had multiplied them. William is now 11 years old, and he entered Carnegie Mellon University last fall because he wants to become an astrophysicist.

The son of a Greek preacher Peter Mailis, a child prodigy William believes in God. A young scientist wants to use science to prove that God exists. This is his mission.

The title of “genius” for the young William became official when Joan Rutsatz, a psychologist at Ohio State University, announced this. He graduated from high school at the age of 9, and in July 2018 he became the youngest graduate of the college.

A young man from Pennsylvania is not afraid to challenge established ideas. William claims that he can prove that Einstein and Stephen Hawking are wrong when it comes to the origin of the universe.

The young astrophysicist said he did not agree with some of their discoveries. In particular, he does not agree with their statement that there is no God. Scientists like Hawking have declared themselves atheists.

William believes that it is more logical to say that there is a God than not. He hopes to prove that only “external force” could create the universe and, thus, confirm that God exists. Using simple logic, he outlines his general idea:

While many of his peers spend their school days, flying paper airplanes in the classroom or waiting for a call for a break, William reflects on the big issues of life and the universe. He said that after “proving the existence of God”, he wants to continue studying further.