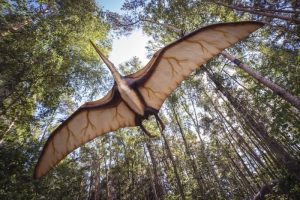 While this bird, sighted in the Rio Grande Valley in the 1970s, left no evidence behind other than sightings and one attack over a brief time period, there are theories.

This Big Bird isn’t the adorable one who lives on Sesame Street with his teddy bear Radar, but was named after him in jest. It was the subject of jokes and concern.

Most witnesses described this unknown mysterious animal, UMA, as about five feet tall, featherless and having a long beak, bat-like wings and a simian face.

All reports of Giant Bird sightings came from the Rio Grande Valley in 1976.

January 1: Tracey Lawson and Cousin Jackie Davies were playing outside when they saw the creature. It was over five feet tall, had dark red eyes, bald head, gorilla-like face and a long beak. The avian emitted a shrill screech. The next day, their fathers saw three-toed tracks, pressed about an inch into the ground. The family dog stayed inside of its doghouse, leaving only to go into the house for dinner, then had to be forced back outside.

January 7: Policeman Arturo Padilla saw something in the headlights of his cruiser; it was a huge bird. Minutes later, fellow officer, Homer Galvan, sighted a large black silhouette gliding through the air. Alverico Guajardo spotted the creature and described it as looking like a bat.

January 14: Armando Grimaldo heard a sound like a bat’s wings flapping. Suddenly, large talons grabbed him and tore his shirt. It was a bird-like creature with red eyes, a monkey-like face and no beak.

About this time, several school teachers witnessed the strange bird, with a wingspan of at least 12 feet across. One of the teachers performed some research and discovered a picture that looked like what they saw. The image that the teacher found depicted a pterosaur. 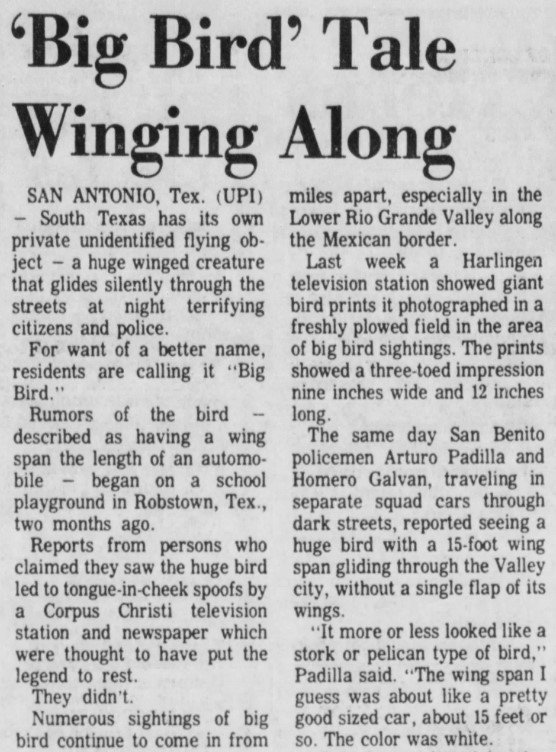 Initially, Big Bird was the target of jokes, including those said by Johnny Carson on his national television show.

As the sightings continued, a radio station offered a reward for the creature’s capture. A television station broadcast a picture of an alleged bird track that measured about twelve inches long.

The Texas Parks and Wildlife Department feared hunters might mistake a protected, large, rare bird, like the whooping crane, for this strange, mysterious bird. Subsequently, they made the public aware that all birds were protected by state and/or federal law.

Some Giant Bird sightings were revealed as hoaxes or misunderstandings. A jabiru, large stork native to Latin America, with a wingspan of up to 9 feet wide, was captured. It’s believed it got lost during migratory flight.

A video of a large blue heron, native to Texas, was broadcast as that of Big Bird. The furor faded when sightings ceased. But some remembered the Big Bird sightings and they continued to wonder about the creature.

Mothman: Rejected mainly because the descriptions are too different and this creature’s sightings were limited to West Virginia.

Thunderbird: Open to speculation because these birds, most often sighted from Pennsylvania to the northern Midwest, have been said to resemble teratorns and pterodactyls.

Pterosaur: This is the primary theory. They were the first flying reptiles and had vertebrae. Their wings were bat-like and they had no feathers. It’s believed they became extinct sixty-five million years ago. Fossil remains of the largest known flying pterosaur, Quetzalcoatlus, were found in Big Bend National Park, Texas, in 1972, four years before the first sightings of Big Bird.

It may never be known what this strange flying creature was because it seemed to have completely disappeared. It left no evidence of its existence and there have been no new sightings since the 1970s.