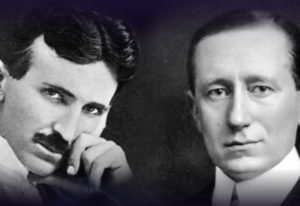 The relationship between Tesla and Marconi is a fascinating one! While Tesla has become a popular figure to revisionist scientists in the last ten years, Marconi is still largely unknown and seen as a usurper of Tesla’s inventions.

Unlike Tesla, Marconi was a good businessman, socially adept, and was able to manage a sizable financial and manufacturing empire. When Marconi allegedly died in 1937 (while still a relatively young and healthy man) he was a multimillionaire, lived on a luxury yacht, and was probably the most knowledgeable man in the world at the time in the practical application of Tesla Technology.

In the esoteric writing of the Latin countries, Marconi has achieved a near legendary status, much as Tesla has recently in the United States. But most Tesla students are unaware that Marconi was supposed to have founded a secret high-tech city in the remote southern jungles of Venezuela. The great Italian scientist Guglielmo Marconi was a former student of Tesla’s.

It was thought that the curve of the earth’s surface would limit radio transmission to 200 miles at the most. When on December 11, 1901, Marconi transmitted a signal from Poldhu, Cornwall, to St. John’s Newfoundland, 2000 miles away, he created a major sensation. For this Marconi replaced the wire receiver with a coherer, a glass tube filled with iron filings, which could conduct radio waves.

At the time there was no scientific explanation for this phenomenon of long-distance transmission, and it was postulated that there was a layer in the upper atmosphere the ionosphere which reflected back electromagnetic waves.

Marconi was the son of a wealthy Italian landowner and an Irish mother. When his first transmission in 1895 had not interested Italian authorities, he had gone to Britain. The Marconi Wireless Telegraph Company was formed in London in 1896 and Marconi made millions off his inventions.

Marconi and Tesla are both given credit for the invention of the radio. Marconi’s historical radio transmission utilized a Heinrich Hertz spark arrester, a Popov antenna, and an Edouard Bramely coherer for his simple device that was to go on to become the modern radio.

Marconi was given the Nobel Prize for Physics in 1909 jointly with Karl Ferdinand Braun, who made important modifications which considerably increased the range of the first Marconi transmitters. 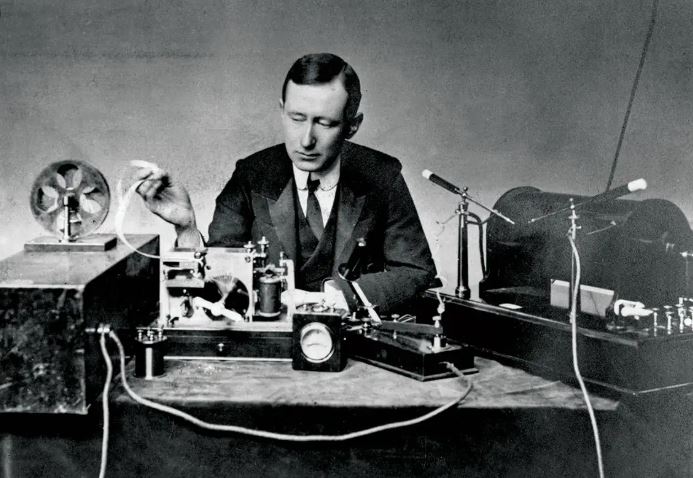 Like Tesla, Marconi was a mysterious man in his later years and was known to perform exotic experiments, including some in anti-gravity, aboard his yacht Electra.

Marconi’s yacht was a floating super-laboratory, from which he sent signals into space and lit lights in Australia in 1930. He did this with the aid of an Italian physicist named Landini by sending wave train signals through the earth, much as Tesla had done in Colorado Springs.

In June of 1936 Marconi demonstrated to Italian Fascist dictator Benito Mussolini a wave gun device that could be used as a defensive weapon. In the 1930s such devices were popularized as death rays as in a Boris Karloff film of the same name. Marconi demonstrated the ray on a busy highway north of Milan one afternoon.

Mussolini had asked his wife Rachele to also be on the highway at precisely 3:30 in the afternoon. Marconi’s device caused the electrical systems in all the cars, including Rachele’s, to malfunction for half an hour, while her chauffeur and other motorists checked their fuel pumps and spark plugs. At 3:35 all the cars were able to start again. Rachele Mussolini later published this account in her autobiography.

Mussolini was quite pleased with Marconi’s invention. However, it is said that Pope Pius XI learned about the paralyzing rays and took steps to have Mussolini stop Marconi’s research.

According to Marconi’s followers, Marconi then, after faking his own death, took his yacht to South America in 1937.

A number of European scientists were said to have gone with Marconi, including Landini. In 1937, the enigmatic Italian physicist and alchemist Fulcanelli warned European physicists of the grave dangers of atomic weapons and then mysteriously vanished a few years later. He is believed to have joined Marconi’s secret group in South America.

Ninety-eight scientists were said to have gone to South America where they built a city in an extinct volcanic crater in the southern jungles of Venezuela.

In their secret city, financed by the great wealth they had created during their lives, they continued Marconi’s work on solar energy, cosmic energy, and anti-gravity. Working secretly and apart from the world’s nations, they built free-energy motors and ultimately discoid aircraft with a form of gyroscopic anti-gravity.

The community is said to be dedicated to universal peace and the common good of all mankind. Believing the rest of the world to be under the control of energy companies, multinational bankers and the military-industrial complex, the story goes, they have remained isolated from the rest of the world, working subversively to foster peace and a clean, ecological technology on the world.

We have information on this astonishing high-tech city from a number of sources. In South America the story is a common subject among certain metaphysical groups. Says the French writer Robert Charroux in his book The Mysteries of the Andes (1974, 1977, Avon Books), the Ciudad Subterranea de los Andes, is discussed in private from Caracas to Santiago.

Charroux goes on to tell the story of Marconi and his secret city, plus the story of a Mexican journalist named Mario Rojas Avendaro, who investigated the Ciudad Subterranea de los Andes (Underground City of the Andes) and concluded that it was a true story.

Avendaro was contacted by a man named Nacisso Genovese, who had been a student of Marconi’s and was a physics teacher at a high school in Baja, Mexico.

Genovese was an Italian by origin and claimed to have lived for many years in the Ciudad Subterranea de los Andes. Sometime in the late 1950s he wrote an obscure book entitled My Trip to Mars.

Though the book was never published in English, it did appear in various Spanish, Portuguese and Italian editions.

Genovese claimed that the city had been built with large financial resources, was underground, and had better research facilities than any other research facility in the world (at that time, at least). By 1946 the city already used a powerful collector of cosmic energy, the essential component of all matter, according to Marconi’s theories, many of which he had derived from Tesla.

In 1952, according to Genovese, we traveled above all the seas and continents in a craft whose energy supply was continuous and practically inexhaustible. It reached a speed of half a million miles an hour and withstood enormous pressures, near the limit of resistance of the alloys that composed it. The problem was to slow it down at just the right time.

According to Genovese, the city is located at the bottom of a crater, is mostly underground, and is entirely self-sufficient. The extinct volcano is covered in thick vegetation, is hundreds of miles from any roads, and is at thirteen thousand feet in the jungle mountains of the Amazon.

The French author Charroux expressed surprise and disbelief at the statement that the city was on a jungle-covered mountain that was 13,000 feet high. Yet the eastern side of the Andean cordillera has many such mountains, from Venezuela to Bolivia, spanning thousands of miles.

Several such cities and mountains could exist in this vast, unexplored, and perpetually cloud-covered region.

Yet a secret city in a jungle crater was the least of the claims. Genovese insisted that flights to the Moon and Mars were made in their flying saucers.

He claimed that once the technology had been conquered, it was relatively simple to make the trip to the Moon (a few hours) or Mars (several days). Genovese does not mention pyramids or what they did on Mars. Perhaps they created a Martian base in one of the ancient, sand-blown pyramids of the Cydonia region.

There have been many reports of UFOs in South America, especially along the edge of the mountainous jungles of the eastern Andes, from Bolivia to Venezuela. Is it possible that some of these UFOs are anti-gravity craft from the Ciudad Subterranea de los Andes?

In light of highly reliable sources who claim that a Last Battalion of German solders escaped via submarine in the last days of WWII to Antarctica and South America, it is possible that the Germans may have high-tech super cities in the remote jungles of South America as well.

A number of military historians such as Col. Howard Buechner, author of Secrets of the Holy Lance, maintain that the Germans had already created bases in Queen Maud Land, opposite South Africa during the war.

Afterwards, German U-boats, in some reports as many as 100, took important scientists, aviators and politicians to the final fortress of Nazi Germany. Two of these U-boats surrendered in Argentina three months after the war. In 1947, the U.S. Navy invaded Antarctica, mainly Queen Maud Land, with Admiral Byrd in command.

The Americans, it is reported, were defeated and several jets from the four aircraft carriers were said to have been shot down by discoid craft. The Navy retreated and did not return until 1957.

According to the book Chronicle of Aor, first published in German by the journalist Karl Brugger, a German battalion had taken refuge in an underground city on the borders of Brazil and Peru.

Brugger, a German journalist who lived in Manaus, was assassinated in the Rio de Janeiro suburb of Ipanema in 1981. His guide, Tatunca Nara, went on to become Jacques Cousteau’s guide on the upper Amazon.

While the idea of secret cities in South America manufacturing flying saucers and battling the current powers of the world from their hidden jungle fortresses may sound too much like the plot of a James Bond movie, it appears to be rooted in fact!

Based upon the above scenario, it may not be totally fantastic to suggest, as some authors have, that Tesla was picked up during the late 1930s by a flying saucer. Yet it would not have been a flying saucer from another planet, but one of Marconi’s craft from the secret city in South America.

In the most incredible scenario so far, and one that may well be true, Tesla was induced to fake his own death, just as Marconi and many of the other scientists had done, and was taken, by special discoid craft, to Marconi’s high-tech super-city.

Away from the outside world, the military governments, the oil companies, the arms and aircraft manufacturers, Marconi and Tesla, both supposedly dead, continued their experiments in an atmosphere conducive to scientific achievement.

Who knows what they may have achieved? They were ten years ahead of the Germans and twenty years ahead of the Americans in their anti-gravity technology. Could they have developed discoid spacecraft in the early 1940s, and gone on to time travel machines and hyperspace drives? Perhaps Marconi and Tesla went into the future, and have already returned to the past!

Time travel experiments, teleportation, pyramids on Mars, Armageddon, and an eventual Golden Age on earth, may all have something to do with Tesla, Marconi and their suppressed inventions.

While UFO experts and former intelligence agents tell us that flying saucers are extraterrestrial and are being currently retro-engineered by military scientists, Tesla, Marconi and their friends may be waiting for us at their space base at the pyramids and Face on Mars.

Our government, Hollywood, and the media have trained us to certain beliefs and prejudices that amazing technology must be from extraterrestrials visiting our planet.

To the scientist-philosopher who seeks knowledge, sometimes truth is stranger than fiction.