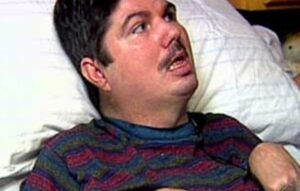 Terry Wallis is an American man living in the Ozark Mountains of Arkansas who on June 11, 2003, regained awareness after spending 19 years in a coma.

Terry Wallis was born on April 7, 1964, in Arkansas to Angilee and Jerry Wallis. Six weeks before his accident, Wallis became a father when his wife Sandi (b. 1968) gave birth to his daughter Amber.

Wallis became comatose when he suffered a major automobile accident wherein his pickup truck skidded off a small bridge near Stone County, Arkansas, on July 13, 1984, resulting in the death of one of his friends.

The pickup truck was found upside down in a dry riverbed after Wallis smashed into a railing fence and fell 7.6 meters.

He was found to be unresponsive and was immobilized but breathing. The accident left him a quadriplegic in a Mountain View nursing home. Within a year of the accident, the coma stabilized into a minimally conscious state, but doctors believed his condition was permanent.

Terry remained comatose until June 13, 2003 (yes, also on Friday the 13th) when he awoke in his hospital bed and uttered his first words. His daughter was now 19 years old. His wife left to raise their daughter on her own for nearly 2 decades. His mother and father still alive.

When a nurse asked him who the woman walking toward him was, he replied “mama”. His second word: “Pepsi”. That was quickly followed by “milk” and by the second day Terry was talking as if nothing had ever been wrong. The only problem anyone could tell was Terry was still living in 1984.

Terry asked for his grandparents who had since died. He still refers to Ronald Reagan as the president. He remembers his old home’s phone number, a phone number that everyone else had long forgotten. He was shocked to hear that the U.S.S.R was no longer an enemy and that the Berlin wall had fallen.

His muscles remained weak but he gradually experienced limited recovery over a three-day “awakening period” in which he regained the ability to control some parts of his body and to speak to others.

However, he remains disabled from injuries suffered during the original accident, including the motor speech disorder dysarthria.

Wallis was the subject of the BodyShock special for 2005 “The Man Who Slept For 19 Years” made for Channel 4 in the UK. It shows his mother and daughter encouraging him to talk to neurologists to try to find out how Wallis had regained speech after such a long time.

The programme featured several well-known doctors, including Dr. Caroline McCagg, the medical director of the JFK Center for head injury in New Jersey; Dr. Joe Giacino, a neuropsychologist who said Wallis’ brain retained a lot of information from before 1984 but hardly any after 1984 because Wallis lost the ability to store new memories and was essentially amnestic; and Dr. Martin Gizzi, a neurologist who showed that, owing to damage to the frontal lobes, he could not process experiences into memories.

Doctors still debate the definition of a coma. Patients who remain unconscious for many years are more commonly said to be in a permanent vegetative state. It is very rare for them to regain consciousness.