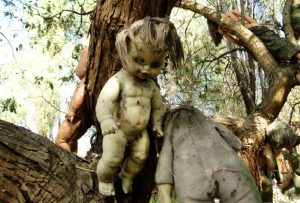 The Island Of The Dolls (Isla de las Muñecas), placed in the vast network of canals that lies to the south of Mexico City, near Xochimilco is one of the creepiest tourist attraction in Mexico. Here, among the branches and dead trees hang hundreds of old, mutilated dolls. The story goes that some half a century ago a little girl drowned off a small island hidden deep amongst the canals of Xochimico.

The island’s only permanent inhabitant was a hermit named Don Julián Santana Barrera, who despite having a wife and family, chose to live alone on the island. Soon after the girl’s death Barrera fished out one doll after another from the canals. Convinced that this was a sign from the evil spirit, Don Julian Santana began hanging them on trees to protect himself from evil and calm the spirit of the dead girl. Soon Don Julián had made the entire island into a shrine.

What doesn’t help this place becoming a popular travel destination is the fact that almost every single tree is decorated with deformed and mutilated dolls. The dolls almost seem evil and I seriously wonder where one would buy such creepy dolls. As you walk the island, it supposedly feels like you are being watched at all times. Well of course creepy toys aren’t enough to make this a candidate for scariest place in the world. You guessed it, the island is supposedly haunted! 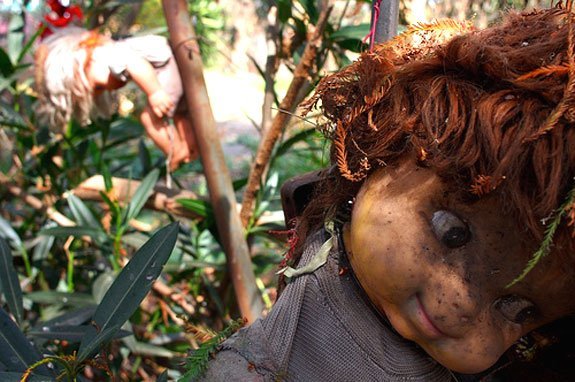 Even though the island is totally abandoned, over 50 years ago, a man named Don Julian Santana left his wife and kids and moved there to live the rest of his life alone. When he was living there, the body of a dead little girl came floating up in one of the canals. Don Julian thought he had become haunted by her spirit. He began to collect dolls and decorate the island with them. He would trade vegetables and fruits in exchange for any dolls. The dolls were believed to be used by Don Julian as a shrine for the spirit that haunted him. Over the 50 years that he lived there, he continuously collected dolls and decorated them all over the island, until he died.

Santana did not clean up the dolls or attempt to fix them, but rather put them up with missing eyes and limbs, covered in dirt. Even when dolls arrived in good shape, the wind and weather naturally decomposed them over time creating a gallery of eerie and ghoulish faces.As well as damage from the sun – which leaves many of the dolls covered in bubbles, blotches and blisters – the wind and rain have also left their mark, eroding any surface paint and leaving behind pale, skull-like faces, or gradually gnawing away the dolls’ fake hair to create jagged tufts that make them look as if they’re suffering from an agonising wasting disease.

Many are also missing arms or legs – or have been given the limb of another doll that clearly doesn’t match – and even toys without heads are welcome on the island, many strung from washing lines or shoved into the gaps between branches, their exposed necks becoming a home for the exotic spiders and insects that inhabit this sprawling agricultural region. 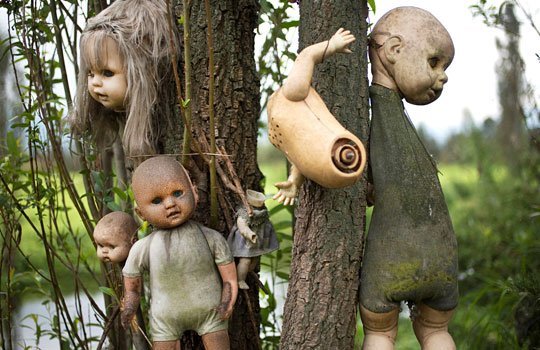 In 2001, Julian’s nephew Anastasio came to visit him and help him plant some pumpkins. On the morning of April 21st, they went fishing together on the banks of the canal and Don Julian began to sing. He told his nephew that he was singing to keep the spirits of mermaids at bay, who had been beckoning him to follow them into the water. Thinking not much of his uncle’s ramblings, Anastasio left his uncle for just under an hour to begin some of the pumpkin planting. When he returned he discovered his uncle Julian face down in the canal by the small pier– in the exact same place where the young girl was also said to have drowned.

Don Julian’s cause of death was found to be heart failure, but many locals strongly believe the spirits finally lured him to his watery death and that his ghost now wanders the island along with the little girl. Today, Anastasio keeps the nightmare island open to visitors with the help of their donations. More superstitious travelers often bring doll offerings and claim to have heard ghastly whispers. Although Anastasio does not live on the island, he swears to have himself witnessed strange occurrences on the island such as his uncle’s dolls turning their heads, moving their eyes* and twisting their limbs…

Although the prehistoric lakes of Xochimilco are a UNESCO World Heritage site and a fairly popular tourist attraction, the Island of Dolls is not on the regular tourist route. You will have to hire your own trajinera and have the driver to specifically agree to take you there (many are not willing to venture there). Some suggest the best place to ask is at the Cuemanco landing, near the Parque Ecológico De Xochimilco. The four hour return trip will likely cost around US$100 ~ $120, but if you gather a group, you can split the cost (and lower your chances of being the one the dolls choose to drag into the waters). 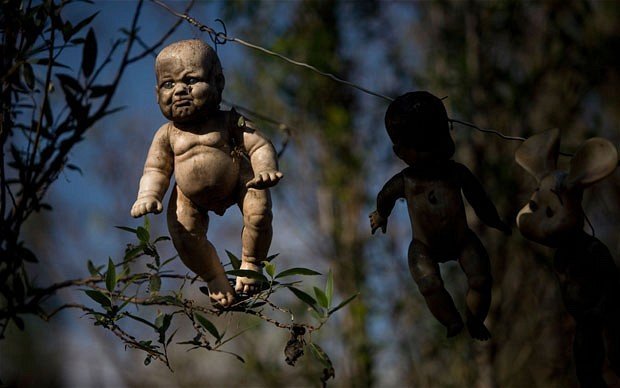 Julian Santana claimed that soon after he came to the island the spirit of this little girl began to talk to him. She told him how she had died and requested he get some dolls for her to play with. She said these dolls would also ward off evil spirits that wandered the wetlands. In order to please her, Santana started to acquire these dolls. He fished old dolls out of the dirty canal that ran past the island, he traveled back to more populated areas in order to raid garbage dumpsters for dolls and he even traded some of the fruits and vegetables he grew on the island for old dolls.

Today “The Island of the Dolls” is an eerie tourist destination. Visitors often state that these doll’s soulless eyes glare at them. Others state they hear these dolls whisper to them especially after sundown. Known Hauntings and Experiences Surrounding the Haunted Island Dolls. While there are various legends and tales that surround this island and its dark history, I am fairly sure that I have provided you with the most accurate information above. Some legends involve Barrera’s finding of the girl’s body, then the dolls being a sort of gift to keep the “evil” spirit at bay. Others tend to be much more extravagant and hyped, in order to gain attention. Now, I will share with you some experiences that cause many to believe the island is haunted. I cannot say how true they are, or that I have experienced myself. Perhaps you can one day visit this island and tell me about your own experiences!

For the most part, hauntings on this island consist mainly of whispers and voices coming from the dolls; it is also believed that the dolls will move. While it may simply be considered crazy, and unlikely- what if it really does happen? I am fairly certain many of you would find bricks in your jeans should you be stuck on this island at night alone, only to hear voices or to see heads turning. Seeing this for myself would keep me from ever questioning the existence of the spiritual realm again, that is for sure.

In some legends, the spirit of the girl is believed to be evil and possess the dolls that dot this island. The haunted island dolls would come to life, and watch visitors. Some superstitious tales suggest that bad things happen to visitors who fail to bring a doll as a gift to stay on the island.