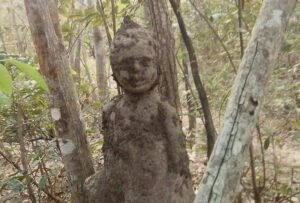 A strange termite mound, the upper part of which is extremely similar to the body of an 8-9-year-old child, was discovered in a forest near a small village in Thailand. The locals immediately declared it a miracle and tied the termite mound to the ghost boy from the legend.

An oddly-shaped termite was accidentally spotted on January 26, 2021 in a forest near the small village of Ban Khok Klan in Surin province.

After the photos of this termite mound were published in local media, they went viral on Facebook. 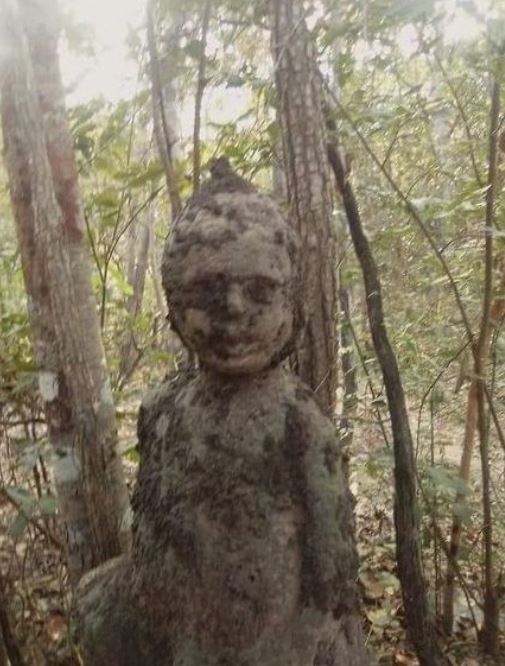 The small humanoid shape of the mound led onlookers to liken it to a figure known as Ai Khai, which translates to Egg Boy, a mischievous spirit believed to bring good luck.

Legend has it that Ai Khai was a young novice monk following LP Thuad on his pilgrimage. When LP Thuad came to Wat Chedi, Si Chon district, Nakhon Si Thammarat province, he ordered Ai Khai to stay there and look after the temple on his behalf.

Not long after that, Ai Khai died when he was still a boy and his spirit has lived there ever since as a guardian. Ai Khai’s spirit always keeps an eye on the temple; whoever goes in without permission or breaks into to the compound to steal things will be frightened away by him.

The power of Ai Khai is widely known in Nakhon Si Thammarat and other provinces. People said that during World War II, he frightened the invading foreign soldiers, making sure that they ran away without thinking.

After the discovery of the termite boy, the people began to visit the temple more diligently, as well as buying special talismans with numbers in it. It is believed that they can help win the lottery.

Scientists told how dangerous a meeting with aliens for humanity