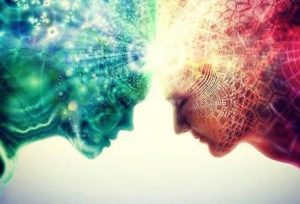 Telepathy is considered to be a suspect paranormal phenomenon, which involves the direct transfer of thoughts, feelings, and/or impressions from one mind to another.

Telepathic communication is considered to not only be a paranormal activity, but an intuitive/psychic ability as well. Similar to the idea of clairvoyance, telepathy involves the use of ESP or extra-sensory perception.

The receiver is able to inexplicably “pick-up” the feelings, thoughts, or images of the sender’s past, present, or future occurrences.

Telepathic transference often, but not always, occurs around the sender’s traumatic events and life crises. Studies of twin telepathy have been conducted in response to the belief that genetically identical twins have the innate ability to communicate non-verbally – even when physically distant-without any direct intention of doing so.

Some support the notion that telepathy exists between those who have similar energy frequencies, not just those who are closely related or know each other well. Carl Jung, the Swiss psychiatrist, believed that telepathic communication was a function of synchronicity or “meaningful coincidence.”

The idea of telepathic communication occurring between two people who share a spiritual connection has been proposed by Enoch Tan in his article “Telepathic Communication Between Two People”.

Empathy is found to be a personality component of most highly sensitive people. In its simplest definition, empathy can be described as the ability to see and feel things from another person’s perspective. Tan supports the idea that empathy is critical to the act of telepathic communication.

A spiritual connection can theoretically stem from a former bond established during your lives in the past. Spiritual soul mates will often find themselves drawn to each other without an explanation, finding that they have numerous synchronicities between their separate lives and a buried intangible lesson to learn from each other.

In a real sense, they push each other to grow beyond their own self-imposed limitations and resolve deeply seeded issues that may be preventing them from realizing their individual life purpose.

The Purpose of Telepathy in Spiritual Connections

Telepathic communication may occur almost spontaneously between individuals with a spiritual connection once they become aware of each other’s existence in their current lifetime.

Telepathy may begin to occur as the primary form of communication between soul mates who have shared lives in the past if they first come to know of each other through vicarious means.

In other words, in their current incarnations, they do not physically know each other; it’s possible that they have yet to meet in person, or they may currently be separated by geographic distance.

Telepathy may be a way for one soul mate to privately communicate to the other what they need help or guidance with. It may, possibly, be a remnant of the potential physical or emotional bond that their former incarnations shared in their past lives.

Regardless, soul mate relationships typically serve as a reflection for both individuals in question-each individual has already been through the lesson or challenge that the other is currently faced with.

As with all forms of clairvoyance, telepathic communication will reveal only what each individual is comfortable with sharing. Its success is dependent upon the intentions of both the sender and the receiver.

Since this paranormal form of transference involves non-verbal feelings and visual images or auditory messages, it can at times be difficult for the receiver to interpret the metaphoric impressions with ease.

While scientifically unproven, telepathic communication is thought to be an intuitive skill that is most likely to occur between two individuals who share a close connection.

Whether the connection proves to be a physical relation or a spiritual bond, at its core telepathy involves trust, empathy, and the mutual intention to have certain thoughts and feelings known.

A spiritual connection, possibly resulting from a shared past life, can result in telepathy for the purpose of guiding the other individual through their current incarnation’s traumatic challenges – past, present, or future.

Where Does Karma Sit with the Law of Attraction?

How to Open Your Third Eye

What Is An Aura And Do All People Have Auras?