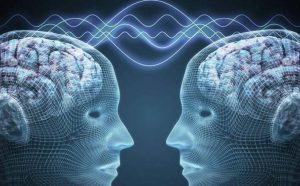 Perhaps the earliest studied form of psychic phenomena is telepathy—the communication of thought between two minds without the use of normal sensory channels.

The Encyclopedia of the Unexplained defines telepathy as “direct contact between one mind and another, the ability to sense another person’s thoughts and mental states or to convey your own to other people without the use of speech, gestures, or other physical signaling.”

The term was coined by F.W.H. Myers in 1882 at the conclusion of his investigation into the possibilities of thought transference.

Telepathy has been studied as early as the 1870s by such notable scientists and Spiritualists as F.W.H. Myers, Sir Oliver Lodge, William Barrett and Professor Hyslop. In fact, these scientists became firm believers in telepathy as they believed it demonstrated the continuity of life.

However, the first couple of studies of telepathy were refused publication by the Royal Society and the British Association for Advancement of Science. Sir William Crookes’ study was refused by The Royal Society in 1871 because it didn’t denounce the phenomenon of Spiritualism. However, Crookes continued to investigate telepathy until he was satisfied that telepathy was real.

Testing often took the form of drawing designs (such as a square with an x in it) on a sheet of thick paper, using a deck of ESP cards (each with one of five designs on it), or holding up a square of colored fabric to a blindfolded percipient.

These studies found several things: that the more outgoing a person is and the more prior experience they’ve had the ESP, the more successful the experiments. It also helped if the subjects believed in the phenomenon of ESP or telepathy.

J. B. and Louise Rhine studied telepathy in 1930 at Duke University. The Rhines developed the ESP deck of cards still used today. The symbols used were a star, cross, wave, circle and square.

They also set forth some precautions to make sure that the studies were being carried out scientifically. These included:

Telepathy can occur in several different states of being – waking, dreaming or in hypnotic trance. Often, telepathy occurs during crisis situations, such as when a family member knows that something is happening to a loved one.

According to Morris Pratt Institute, crisis telepathy is the most frequent, most accurate and most often recorded form of telepathy.

In any state the telepathy takes place, there is the transference of thought between two connected minds. This communication happens without the use of other sensory organs – such as the eyes to read facial expressions and body language.

Dowsing: Ancient Technique To Find What You Are Looking For