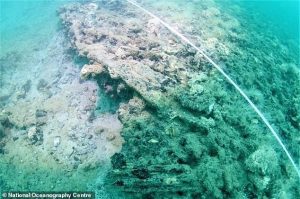 Underwater researchers from the Maritime Archaeology Trust have unearthed what appears to be the oldest shipbuilding yard known to science.

The discovery is reported on the website of the National Oceanographic Center in Southampton. The study was conducted off the coast of the Isle of Wight. Underwater archaeologists have discovered the remains of a man-made wooden platform.

The analysis showed that the age of this object is about 8000 years. That is, this shipyard, as scientists call it, was built by people of the Stone Age. They probably made boats on it. By the way, the oldest shipyard was considered to be about 5500 years old.

“At this site, we found a lot of evidence of the existence of technologies that are believed to have appeared only several millennia later,” says Harry Momber, head of the Marine Archaeological Foundation.

“In particular, advanced wood processing technology has been applied here. This object highlights the importance of maritime archeology in understanding the development of our civilization.”

The ancient shipyard is located at a depth of 11 meters. But eight thousand years ago it was dry land covered with vegetation. It is likely that the Isle of Wight was then part of continental Europe.

The object was first noticed in 2005. However, only now researchers have developed technologies that have made it possible to study it in detail and create a three-dimensional model of the ancient landscape of this territory and the construction site itself.

It is simply incredible that people of the Stone Age knew how to make boats and, moreover, built shipyards.

A ‘Vintage-UFO’ flew over a Polish village: a local resident managed to capture it