The Tazelwurm, which is German for “worm with claws”, is a cryptid, or unknown animal seen in several areas of Europe, especially the Swiss and Austrian Alps. It is described by witnesses as scaly with a worm-like body, little to no neck, and a length of two to six feet long.

Reports vary as to whether the creature has two legs or four, with the back legs being thought of as atrophied from disuse, but witnesses agree there are claws on the toes.

The most unique part of the body is the head. Accounts indicate that the creature has big eyes, and the shape of the face and head are much like a feline, except it has scales instead of fur. This feline look is consistently recounted by almost all witnesses. 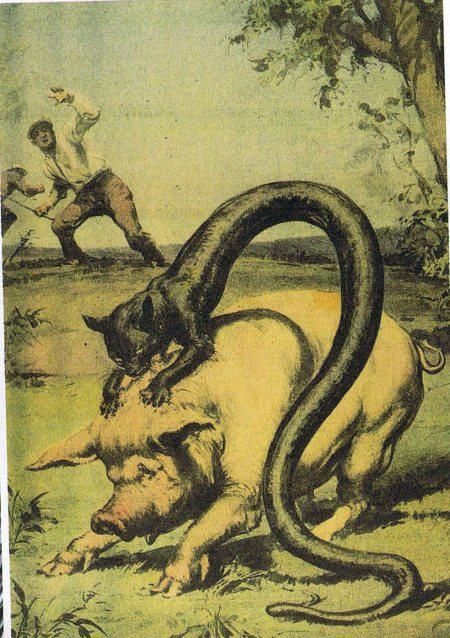 Tatzelwurms are sometimes called the Stollenwurms or Springwurms, because of their ability to leap far distances. Folklore states that when injured, the Tazelwurm would bleed green blood, and that this creature can kill humans by expelling poisonous fumes, although accounts of this are seldom, if any.

The tatzelwurm is believed to eat the meat of other animals. Artist depictions of the tatzelwurm show the creature feasting on pigs and other livestock.

Sightings of the Unknown Creature

The first reported sighting of a tatzelwurm was in 1711 by a man named Jean Tinner, who was in Switzerland at the time. He told the authorities that he had seen the mysterious creature and shot it with a musket. No creature fitting the description of a tatzelwurm was seen again in the area.

Another suspected tatzelwurm sighting was in 1779 by a man named Hans Fuchs. He saw two of them while out in the mountains, and ran home very frightened. The stress of the event caused him to have a heart attack, but he did reach his house and was able to tell his family about his sighting before he died.

The most recent possible sighting was in 1934, when a photographer named Balkin took a photo of an unusual log. When the flash on the camera went off, the log got up and ran away. Could this have been the elusive tatzelwurm?

Sightings have been rare in the past, and one has to wonder if this cryptid did once exist, is it now extinct?

An explanation for the tatzelwurm could be that it was a giant salamander that happened to be native to the European Alps. Giant salamanders do exist, although found mainly in the United States and Asia.

Some have reached up to almost five feet in length. If the tatzelwurm was a salamander, and it spent most of the time in the water, when seen on land it would no doubt be considered an unknown creature.

However, giant salamanders have a diet of mainly fish and insects, not livestock. If the tatzelwurm was a sort of giant lizard, then it may have preyed upon livestock, although the reports of only two front legs or atrophied back legs do not fit the description of a lizard, either.

Could the tatzelwurm have been some evolutionary link between lizards and snakes? Or was it something unknown, living the deep crevices of the mountains, hibernating for years, and emerging only to feed? Perhaps we will never know.