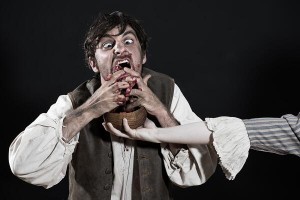 Tarrare (his genuine name’s unknown) was born into a rural family in 1772 near Lyons. He suffered from a unusual abnormality – his appetite which it is said could never be sated. In his teens it is said that he could eat a quarter of a cow, approximately his own body weight, in a one day.

By the age of 17, nevertheless, we know that he weighed about 45 kg (100 pounds) regardless of his incredible appetite and unusual diet. By this point he had outgrown his family’s ability to feed him and he was turfed out of his childhood home.

Homeless, Tarrare joined a group of thieves and prostitutes who toured the French countryside and with whom he begged for, and often stole, food. Eventually his desire for food was discovered by a traveling charlatan who employed him as the warm-up perform for his show.

Tarrare would draw in the crowds through feats of eating. He would start small by consuming corks and stones. By the end of his act he was eating baskets of apples whole, and finally whole live animals (without chewing).

This act didn’t always go to plan. In 1788 he was performing in Paris and suddenly suffered a severe intestinal obstruction. Members crowd took him to the Hotel-Dieu hospital where he was given powerful laxatives to “shift” the obstruction.

He quickly made a full recovery and offered to prove it by eating the surgeons watch and chain to which the doctor replied, unimpressed, that “if he [Tarrare] did then he would simply cut him open and get them back”.

Soon after this episode in 1792 the War of the First Coalition broke out. The monarchies of Europe were attempting to squash the young French Republic for their execution of Louis XVI. Tarrare, like many young men, joined the French Revolutionary Army to fight for his country.

However, the measly rations were not enough to satisfy his appetite. Soon he was carrying out tasks for other soldiers in exchange for a share in their rations, later he would get more depraved an would scavenge on the dung heap, garbage bins and gutters for food. Struggling from extreme exhaustion he was admitted to Soultz-Haut-Rhin military hospital.

They quadrupled his rations but this would still not satisfy him, he scavenged for scraps of other patients rations and even stole into the apothecary’s office and ate all of the poultices. The surgeons could not get their head around his voracious appetite and decided to conduct experiments, to be headed by Dr. Courville (9th Hussar Regiment) and Baron Percy ( Surgeon-in-chief of the hospital).

Their first experiment was to allow him to access a meal for 15 laborours just outside the hospital gates. Tarrare ate the entire meal of two large meat pies, plates of grease and salt, and four gallons of milk in one sitting before falling asleep immediately.

The experiments took a darker turn when he was presented with live animals. At one point he was presented with a live cat. He tore open the cat’s abdomen with his teeth and drank the cat’s blood before eating the entire cat (not including the bones) soon after vomiting up the fur and the skin. Following this experiment he was offered a wide range of live animals, including snakes (his favourite), lizards, eels, and puppies.

Eventually it was decided that Tarrare’s appetite could have military applications for carrying messages through enemy lines. Tarrare was introduced with a wooden box with a message inside. Having eaten and excreted it, the message was still legible. He was asked to repeat this feat in front of the assembled generals of the Rhine Army, as a reward he was given 14 kg of raw bulls lungs which he ate in front of the generals.

For his first goal he was sent to deliver a message to a French officer held captive in Neustadt. Dressed as a German peasant Tarrare went behind enemy lines. However, nobody had thought of the fact that Tarrare could not speak German.

The Prussians quickly discovered that this French speaking peasant was a French spy. Tarrare was captured on his first mission, the message he was “carrying” wasn’t discovered. Tarrare was due to be hanged but, on deciding he wasn’t a danger, he was released with a strong beating instead.

Following this episode Tarrare went back to the military hospital and pleaded with Baron Percy to help him cure his appetite. Percy put him on a course of laudanum which failed. Percy would also try tobacco pills, wine vinegar, and large quantities of soft-boiled eggs. All of these failed to lessen Tarrare’s monstrous appetite. He would sneak out of the hospital to search for offal outside butcher’s shops and fought with stray dogs for scraps.

We do not know what happened to Tarrare in the period in between but four years later, in 1798, Percy was summoned by him to Versailles hospital. Tarrare was gravely ill, he suspected due to golden fork that he had swallowed two years previously that had gotten lodged. Percy diagnosed him with tuberculosis. Tarrare died a month after this meeting from exudative diarrhea.

The cause of his appetite is still unknown but it has been speculated that it was as a result of a damaged amygdala (part of the brain) which caused polyphagia (excessive hunger).

Tarrare was not an attractive man by any standards. He was described as being slim with smooth fair hair. His mouth was extremely large with almost unseeable lips under which his teeth were heavily stained. When he had not eaten, his skin was apparently so loose that he could wrap the skin of his abdomen completely around his waist.

His body was apparently hot to touch and he sweated heavily. His stench was apparently so bad that “it could not be endured from the distance of twenty paces”. After he had eaten this smell apparently became worse, his eyes would go bloodshot and a visible vapour would rise from his body. Despite his excessive eating it is said that he never really gained weight.