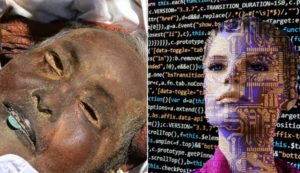 In theory, the system is capable of imitating communication with any person. Even dead one.

The corporation Microsoft has developed and patented a technology that will allow the creation of chat bots based on information about people and their biological parameters.

Microsoft has created technology that is designed to dramatically improve existing voice chatbots that interact with users. To do this, the system must collect photographs of people, recordings of their voices, messages on social networks, and emails.

With the help of artificial intelligence, all this data will be processed and, as a result, the algorithm will be able to quite reliably imitate a person’s communication style in social networks and build speech models that completely copy it.

The system can be used, among other things, to create voice chat bots that completely copy the communication style of deceased people – thus creating their virtual clone, with which you can communicate by correspondence and even talk.

Microsoft keeps the purpose of this technology a secret. If it is used to create clones of dead people, then many countries will have to revise the current legislation in the part that guarantees privacy after death.

In South Korea, the heroine of the popular TV show Meeting You become the mother of many children, Chang Ji-sung, whose daughter Nyon died four years ago.

To give her the opportunity to “see” her daughter again, the programmers of the TV show for eight months created a digital model of the girl and transferred it to virtual reality, as well as recreated the child’s voice.

After that, a model of the park was created, in which mother and daughter often walked, and then, as part of the TV show, Chang Ji-Sun and Nyon were temporarily “reunited”.

In the virtual world, mother and daughter took a walk, celebrated Nyon’s “birthday,” and at parting, the girl asked her mother not to grieve over her death anymore.

During the “meeting”, special gloves imitated the “touching” of a child’s hand, so Chang Ji-Sung had the opportunity to “touch” his daughter.

Something similar awaits us all in the future?

Unknown space object plunges into the sea near the Canary Islands