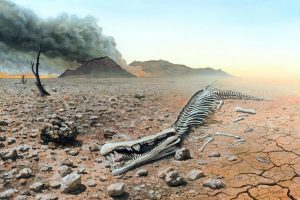 By the end of the century, a mass extinction could begin on Earth, which will destroy more than a quarter of the world’s biodiversity. Scientists from Europe and Australia made such a prediction based on the results of computer simulations, reports Science Advances.

The authors of the study emphasized that in fact, the sixth mass extinction has already begun. In the last hundred years, on average, two species of vertebrates have disappeared annually.

The red list of the International Union for Conservation of Nature includes more than 42 thousand species that are threatened with complete extinction.

Using a supercomputer, scientists from the European Commission and Australia’s Flinders University have created a virtual planet with 15,000 food webs. Then they analyzed how this world will change in the next hundred years.

“Imagine a predator that loses its prey due to climate change. The loss of a prey species is a primary extinction as it was directly affected by the cataclysm. But the predator, since he has nothing to eat, will also die out,” the authors of the scientific work explained.

In addition, climate and land use changes were taken into account. The model allowed scientists to test several possible scenarios.

The results showed “far greater losses than previously thought.” The creators of the model noted that the coming decades will be decisive for the conservation of global biodiversity.