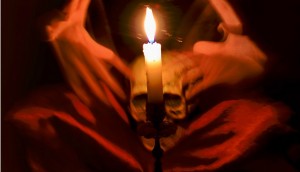 Summoning demons is no joke. Of any and all mythical creatures that you may want to encounter, demons are the easiest to find. But that’s exactly what makes them so dangerous.

In order to summon a demon, all you really need to do is put out an open invitation. If you have a specific demon in mind, you can perform one or more of several demon summoning spells in order to increase the odds of the process working. We’ll get to that later.

As with everything demon-related, I want to reinforce the notion that summoning demons is a bad, bad idea. Even if you don’t believe in demons and think that this is all a joke, it’s best to just stay away from demonology entirely. Don’t mess with it just to prove that it doesn’t exist, and don’t mess with it just to “see what happens”. Actually, don’t mess with it at all. The only reason I even am putting up this section is because demons are an important connection between the supernatural/spirit world and the world of monsters and beasts.

Now that I’ve sufficiently driven that point into the ground, let’s get back to business.

Summoning demons begins with intention. There are many different ways to summon a demon, and you can even make up your own ceremony if you’d like, but all methods involve the intention of welcoming a demon into your world.

This is a bit of a misnomer, as they’re not really “spells” in the magic-sense. You don’t need any supernatural spell-casting power to perform these rituals. They are just commonly referred to as spells, so I am keeping with tradition here.

Summoning demons successfully usually involves multiple people. If the intention is strong enough within one individual, it is still possible to successfully move a demon through the planes of existence, but it’s just plain easier with more people. Think of it mathematically – add up all the intention in the room and you can see that more people usually equals more intention. And as I’ve said, it’s the intention that matters.

Rituals are important in these demon summoning spells. The idea is that you are opening a portal that allows the demon to cross over from its realm into yours.

Keep in mind that demons have rules. They are not allowed to roam freely on Earth without restriction. For the most part, powerful demons may be able to move between planes without much help, but the big rules still apply, such as the need to be invited into someone’s home (much like vampires). For the most part, this also applies to seances and demon summoning ceremonies. The purpose of the ceremony is both to communicate with the demon and to formally invite it into your world.

Knowing this, the stronger the intention and the more focused the ritual, the easier it is to summon a demon. For a summoning to work, it’s important to include some form of ‘formal welcome’ into the ritual. This is usually where the demon summoning spells come in. These can be custom-written or taken from ancient scripture, but either way they must include a formal invitation.

Many demon summoning spells are written in Latin, which is believed to be the primary language of most demons. I’m not sure how much this matters, though. Demons speak mostly through intention, not proper language, but it’s possible that using Latin (or the specific demon’s native language, if you know it) makes the connection stronger to the specific demon of choice.

Before you choose the specific language of your demon summoning spell, decide what your exit strategy will be with the ritual. Are you inviting the demon to stay in your life (not recommended, obviously)? Or is your intention to bring it close enough to speak with it then have it return to where it came?

My guess is that most people interested in summoning demons are interested in speaking with one, or encountering one, and not having a demon take over their body and soul. If this is the case, be very sure to use the language of your invitation very carefully. Yes, you must invite the demon in, but then you must send the demon home (with your words and intentions) before closing the connection to the other side.

This is very important. The ceremony must be done properly. Remember how I said that demons have rules? Well, one of those rules is that if you close the gateway between worlds and you haven’t asked the demon to leave – guess what – you got yourself a demon.

– Decide if you want a specific demon or if just any will do.
– Create a formal invitation for the demon to enter your world.
– Talk to demon as you wish.
– End the ceremony by formally ending the invitation.
– Close the connection between the worlds.

When you formally end the invitation, think of it like politely asking guests to leave after a party has run on too long. At some point the party has to end and sometimes your friends don’t seem to get the hint, so you have to politely kick them out. And, just like you would with your friends, please do so politely. After all, you’ve invited the demon in, don’t “cast it out” after you invited it in. That’s just rude.

Another very important point when summoning demons – when you close the connection, be sure that everyone involved in the ritual is part of the closing. The connection between worlds is a spiritual one, created by each person in the group. Each person must close their connection in order for the gateway to be closed. Do not forget this important step.

Using a Spirit Board

You’ve probably heard of a Ouija board before. These are a brand of spirit board that are used by many people to communicate with the ‘other side’.

“Ouija” is a brand name for the Parker-Brothers version of a spirit board, but is often used when referring to spirit boards in general. The concept is the same either way, a spirit board has a series of letters, numbers and “Yes” or “No” options written on a board. The user or users place their hands on a guiding device called a ‘planchette’, and allegedly by spiritual means, the planchette moves around to spell out the answers to the users questions.

Spirit boards can be useful when summoning demons in so much that speaking to the demon once it is summoned is going to require some means of translation. Spirit boards are most often used for this purpose, since they are said to translate the communication from the spirit into human language.

Of course, spirit boards have their skeptics, but if you intend to communicate with the dead, there are few other options as inexpensive and easy to obtain.

A Final Note on Summoning Demons

I hope you have found this section informative, but more so, I hope it has satisfied any curiosity you might have about summoning demons. The practice itself can be quite dangerous, and is not something I recommend. If you insist on doing so, it’s best to gather a group, usually known as a ‘circle’ (because you all sit together in a circle) and use any and all forms of spiritual protection that you have at your disposal. Good luck.
Source: gods-and-monsters.com

The Magical Power of Herbs: Attract Love, Protection and Healing with Herbs