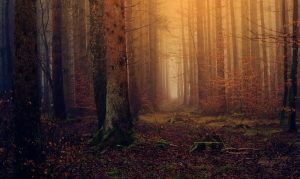 Aokigahara, also known as the Suicide Forest or Sea of Trees, is a 35-square-kilometre forest that lies at the northwest base of Mount Fuji in Japan. The forest contains a number of rocky, icy caverns, a few of which are popular tourist destinations. Due to the wind-blocking density of the trees and an absence of nearly any wildlife, the forest is known for being exceptionally quiet.

The forest has a historic association with demons in Japanese mythology and is a popular place for suicides (57 in 2010) despite numerous signs, in Japanese and English, urging people to reconsider their actions.

The forest floor consists primarily of volcanic rock and is difficult to penetrate with hard tools such as picks or shovels. There is also a variety of unofficial trails that are used semi-regularly for the annual “body hunt” done by local volunteers. In recent years, hikers and tourists trekking through Aokigahara have begun to use plastic tape to mark their paths so as to avoid getting lost.

Though officials try to remove the tape time and time again, tourists and thrill-seekers inevitably leave more and more litter, and a great deal of it lies scattered throughout the first kilometer of the forest, past the designated trails leading to tourist attractions such as the Ice Cave and Wind Cave. After the first kilometer into Aokigahara towards Mount Fuji, the forest is in a more “pristine” condition, with little to no litter and few obvious signs of human presence.

The forest is a popular place for suicides, reportedly the most popular in Japan. Statistics vary, but what is documented is that during the period leading up to 1988, about 100 suicides occurred there every year.

In 2003, 105 bodies were found in the forest, exceeding the previous record of 78 in 2002. In recent years, the local government has stopped publicizing the numbers in an attempt to downplay Aokigahara’s association with suicide. In 2004, 108 people killed themselves in the forest. In 2010, 247 people attempted suicide in the forest, 54 of whom completed the act. Suicides are said to increase during March, the end of the fiscal year in Japan. As of 2011, the most common means of suicide in the forest were hanging and drug overdoses.

The high rate of suicide has led officials to place signs in the forest, in Japanese and English, urging suicidal visitors to seek help and not kill themselves. Annual body searches have been conducted by police, volunteers, and attendant journalists since 1970.

The site’s popularity has been attributed to the 1960 novel Kuroi Jukai (Black Sea of Trees) by Seichō Matsumoto. However, the history of suicide in Aokigahara predates the novel’s publication, and the place has long been associated with death: ubasute may have been practiced there into the nineteenth century, and the forest is reputedly haunted by the Yūrei (angry spirits) of those left to die.