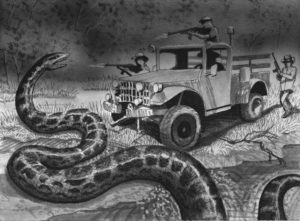 Webster’s Dictionary states that an anaconda is a tropical snake that reaches about 30 feet in length and crushes it’s victims. This is the accepted scientist view, except for the crushing part; anacondas suffocate their prey.

However, natives tell tales of a creature called the Sucuriju, a giant monster resembling a snake but much larger. These are the tales that form the enigma of Sucuriju Gigante, the giant anaconda of South America.

When the Pope gave part of South America to Spain and the other to Portugal in the Treaty of Tordesilla, the Spaniards explored this great continent of tropical forests. They came back with stories of enormous snakes which they called matora, or “bull eater”.

Some reports detailed them reaching over 80 feet in length. Colonel Percy Fawcett, who was sent to map out parts of the Amazon, claimed to have bagged a 62 foot long anaconda. As an officer of the Royal Engineers he was to write down his information meticulously. As he stated in his diary:

“I sprang for my rifle as the creature began to make it’s way up the bank and smashed a .44 bullet into its spine. At once there was a flurry of foam and several heavy thumps against the boats keel, shaking us as though we had run on a snag.

“We stepped ashore and approached the creature with caution. As far as it was possible to measure, a length of 45 feet lay out of the water and 17 feet lay in the water, making it a total length of 62 feet. It’s body was not thick, not more than 12 inches in diameter, but it had probably been long without food.”

In 1925, Father Victor Heinz saw one of these snakes, most likely the anaconda, while on the Rio Negro of the Amazon River. He said that the visible portion was at least 80 feet long and the body was as thick as an oil drum. It was throwing up a wake as large as a river.

Bernard Huevelmans, the father of Cryptozoology, records an encounter of an anaconda with a group of Frenchmen and Brazilians.

“We saw the snake asleep in a large patch of grass. We immediately opened fire upon it. It tried to make off all in convulsions but we caught up with it and finished it off.

“Only then did we realize how enormous it was, when we walked around the whole length of its body it seemed like it would never end. What struck me was its enormous head, a triangle about 24 inches by 20.

“We had no instruments to measure the beast, but we took an arms length of string and measured it about one meter by placing it on a man’s shoulder and extending it to his fingertips. We measured the snake several times and each time we got a length of 25 strings. The creature was well over 23 meters (75 feet) long.”

Scientists never regard eyewitness accounts as evidence, it would take a good documentary or a body to investigate, but a body may be impossible to get out of the jungle.

First, it is hard to travel through the Amazon rain forest, not to mention with an 80 foot long, several ton body. Photographic evidence may be the only one possible. Up until the late 40’s there was no photographic evidence for the Sucuriju, but that came to a halt in 1948.

The Diario, the newspaper of Pernambuco in Brazil, of January 24, 1948 published a picture with a headline ‘Anaconda Weighing 5 Tons.’ The picture shows a part of a giant anaconda that was caught by a band of Indian half breeds.

It was engaged in a siesta near a river with a bull half-swallowed. The Indians tied a rope to its neck and tied the other end to a tree. The anaconda measured 131 feet long. Four months later the newspaper of Rio called A Noite Illustrada held a photograph of an anaconda slaughtered by Militia. It’s length totaled 115 feet.

Herpetologists accept neither photographs as good evidence for the larger than normal anaconda, which they accept a length of 35 feet. Unfortunately the first photograph offers almost nothing for scale except a hut in the background so it is easily dismissed as ‘a normal-sized anaconda ingesting nothing more than a capybara which is native to the area’. Then much more limpid evidence was produced in 1959.

Colonel Rene van Lierde was piloting his helicopter over the Katanga province of the Belgian Congo. Suddenly a gigantic snake reared up as if to attack his helicopter. He lifted up and took several photos of the snake and continued his journey.

His estimate of the size of the snake was about 40-50 feet, and that is the same estimation made by zoologists who later examined the photo. Even still, the largest scientifically measured snake was a 32 foot long reticulated python killed in Indonesia as the world’s longest snake. Until one of these magnificent creatures is brought in, dead or alive, the Sucuriju will always be known as a cryptid.

The Loveland Frog – Sightings of a Reptilian Anomaly In Ohio