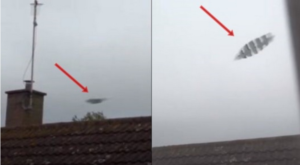 A resident of Cambridge, Paul Bryan, was recently recording on video an approaching and long-awaited thunderstorm after a series of hot days, when a strange object flying at a rather low altitude suddenly appeared.

Paul posted the footage on his YouTube channel and at first thought it was a flock of birds, but upon closer examination of the video, he realized that he was wrong.

The video captured something truly incredible. YouTube users agreed with the author of the video that the passing object does not look like a flock of birds, but rather may be some kind of military drone.

However, other users expressed doubt that the drone could have such shape and design. It is possible that this is a UFO of unearthly origin.

The users were also surprised that this object flew so low and with a relatively low speed. In addition, it produced a characteristic sound for terrestrial aircraft, although not very loud.

The UFO itself is so unique that ufologists have not yet found a suitable analogy for it.

What do you think, what kind of apparatus flew literally over the roof of a house in Cambridge?