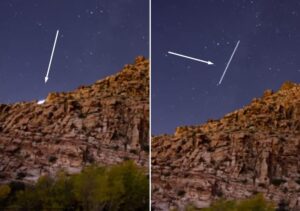 This is a time-lapse of some night photography that Black Bulldog Photo did a couple of months ago and it shows a strange streak of light apparently releasing a bright object.

Immediately after the streak of light, the second object appears from behind the top of the mountain, slowly descending and although the first object looks like a meteorite, it does not yet explain the second object.

Since the images were taken at Red Springs, just west of Las Vegas facing Area51, the photographer wonders whether it was a launch of some sort or not.

Area 51 is one of the strangest places in the world. Stories about flying saucers, and extraterrestrial creatures are quite commonly attached to this area. Of course, being a testing ground for aircrafts, there are numerous flights taking off from this place.

By now, you all know that Area 51 is a restricted area, so you cannot just venture into the place. Even then, there have been some enthusiastic efforts in this regard, such as the recent Storm Area 51 event, which eventually turned into a festival.

But the place piques such great interest that 2 million people actually signed up for the Storm Area 51 event. But, in reality, there are armed guards patrolling the area.