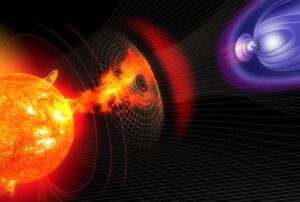 During the time you read this article, something will happen high above your head that until recently many scientists did not believe. A magnetic portal will open, connecting the Earth with the Sun at a distance of 150 million kilometers between them, reports NASA Science.

Tons of high-energy particles will pass through this opening before it closes again, around the time you reach the end of the page.

It’s called a “flux transfer event” or “FTE,” says space physicist David Seebeck of the Goddard Space Flight Center, a major NASA research laboratory. “In 1998 I was sure they didn’t exist, but now the evidence is irrefutable.”

Indeed, David Seebeck proved their existence and presented this evidence at an international meeting of space physicists at a plasma seminar back in 2008 in Huntsville, Alabama.

In the future, NASA fully confirmed that these portals linking the Sun and the Earth appear every 8 minutes.

Researchers have long guessed that the Earth and the Sun must be related. The Earth’s magnetosphere (the magnetic bubble that surrounds our planet) is filled with high-energy particles from the Sun that enter through the solar wind and penetrate the planet’s magnetic shielding.

“We used to think that this connection is permanent and that the solar wind could seep into near-Earth space anytime it is active,” says Seebeck.

“We were wrong. The connections are not at all random and do not depend on flares or the speed of flow of solar particles. These portals open every 8 minutes .”

Scientists talked about how these portals are formed:

Roughly every eight minutes, these two fields briefly merge or “reunite”, forming a portal through which particles can pass. The portal has the shape of a magnetic cylinder the width of the Earth.

Four ESA Cluster spacecraft and five NASA THEMIS probes flew through these cylinders and surrounded them, measuring their sizes and registering particles passing through them.

“They do exist,” says Seebeck.

Now that Cluster and THEMIS have directly explored portals, scientists can use these measurements to model portals in their computers and predict their behavior.

Space physicist Jimmy Rader of the University of New Hampshire presented one such model at a seminar. He told his colleagues that cylindrical portals usually form above the Earth’s equator and then pass over the Earth’s winter pole:

In July, the portals connecting the Sun and the Earth pass over the South Pole .

Seebeck believes that: “I think there are two kinds of these portals: active and passive.”

Active portals are magnetic cylinders through which particles pass fairly easily; they are important conductors of energy for the Earth’s magnetosphere.

Seebeck has calculated the properties of passive FTEs and encourages his colleagues to look for their signs in the THEMIS and Cluster data.

“Passive FTEs may not be very important, but until we know more about them, we cannot be sure.”

There are many unanswered questions:

Why do portals form every 8 minutes?

How do magnetic fields inside a cylinder twist and curl?

“We are thinking hard about it,” says Seebeck.

Meanwhile, high above your head, a new portal is opening, connecting our planet to the sun. Reception and transmission of data?

Ben Rich’s Before He Died: “We Now Have Technology To Take Aliens Home”