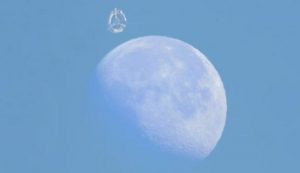 An intriguing video spreads over the Internet, which you can see below. The video, allegedly obtained recently in the American city of Indianapolis, Indiana, depicts a huge object of circular shape hiding in the daytime sky behind the Moon.

Many ufologists, conspiracologists and ordinary web users have concluded that this UFO suspiciously resembles a futuristic orbital station.

It is reported that unusual shots were taken by a local resident who tested the camera with a powerful lens. The man aimed the camera to a natural satellite of the Earth and, by chance, noticed an alleged anomaly near Moon.

The astonished American, according to his own words, waited until the object disappeared behind the moon, then hurried to post the received footage to the Internet.

Commentators ask legitimate questions: what was it and where did it come from?

Has the world government, in secret from the public, created an advanced space device designed for the long-term stay of astronauts in lunar orbit? Or was this “orbital station” built not by humans at all, but by representatives of an extraterrestrial civilization?