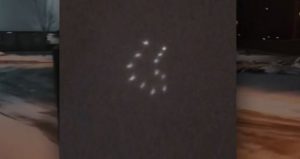 A short video clip has emerged online showing a formation of twelve white lights in the sky above St. Louis Park. The footage, uploaded on February 28th by YouTube user Netzaid Vazquez Diaz, has reportedly been filmed around 8 p.m. On February 10th of this year’s evening.

“I think [it] was a UFO [be]cause [it] was 10 below that night and the lights were too big and stay[ed] for more than 30 [minutes?] in the sky,” user Diaz wrote in the YouTube comments section.

With different channels and news outlets picking up the story, the footage has since managed to attract quite a bit of attention.

While no factual explanation has yet been found, some have suggested that the objects might be flares or maybe even drones-even though the latter may seem unlikely.

The sighting remains a total mystery.