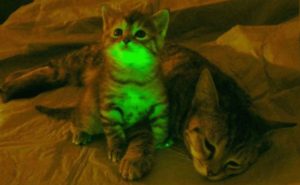 Cats that have been genetically modified to glow in the dark are being used to gain insights into Aids.

The scientists inserted one gene into the cats that helps them resist the feline form of Aids.

This protein – which is produced naturally in jellyfish – is commonly used in this area of research to monitor the activity of altered genes.

“We did it to mark cells easily just by looking under the microscope or shining a light on the animal,” said Dr Eric Poeschla, from the Mayo Clinic in Rochester, US.

The antiviral gene comes from a rhesus macaque, and produces a protein called a restriction factor that can resist Aids-causing viruses affecting other animals. 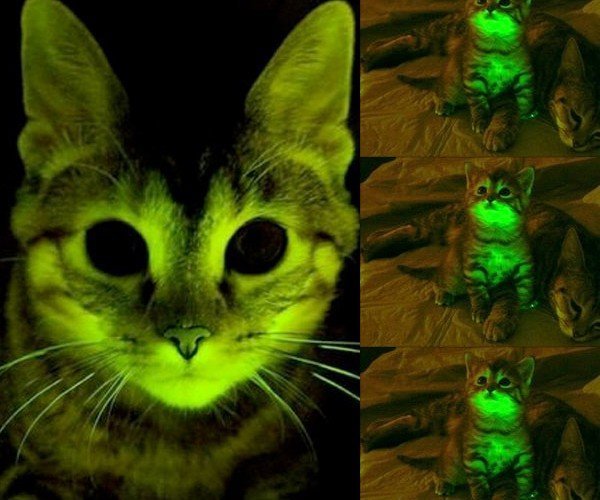 The team from the US and Japan then transferred this gene, along with the one for GFP, into feline eggs – known as oocytes.

The method worked so well that nearly all offspring from the modified eggs had the restriction factor genes. And these proteins were made throughout the cats’ bodies.

The researchers found that there was reduced replication of the feline Aids virus – known as feline immunodeficiency virus (FIV) – in these cats.

Just as the human immunodeficiency virus, or HIV, does in people, FIV works by wiping out infection-fighting T-cells.

FIV infects mostly feral cats, of which there are half a billion in the world, Dr Poeschla said. It is transmitted by biting, largely by males defending their territory, but companion cats are affected as well.

In both humans and cats, proteins called restriction factors that normally fight off viral infections are defenseless against HIV and FIV because the viruses have evolved potent counter-weapons.

But certain monkey versions of these restriction factors are capable of fighting the viruses.

So far, Dr Poeschla’s team has only tested cells taken from the animals and found they were resistant to FIV. But eventually they plan to expose the cats to the virus and see if they are protected.

“If you could show that you confer protection to these animals, it would give us a lot of information about protecting humans,” the Mayo Clinic researcher explained.