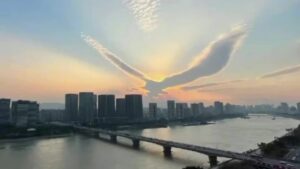 Over the past few days, a birdlike cloud and strange “rainbow” clouds have been seen in the sky over China.

A giant bird-shaped cloud with spread wings was spotted on January 8 over Fuzhou City, Fujian Province.

“I’ve lived here for 30 years, but I’ve never seen anything like this in my entire life”, said Xiu Chang.

“They are doing something. I can even feel it in the air. I just don’t know who is behind this, our government or other countries”, another resident added.

Experts say that rainbow clouds are a kind of optical phenomenon that results from the diffraction of sunlight by individual tiny ice crystals in a cloud.

However, locals believe that such glowing clouds are the result of attempts to control the climate and the dispersion of chemicals in the atmosphere.