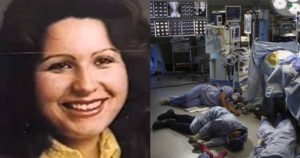 The case of Gloria Ramirez, sometimes known as “The Toxic Lady,” remains one of the most baffling events in modern medicine.

As she was dying in an emergency room, the hospital staff treating her began fainting in droves — some of them requiring hospitalization themselves — and many believe that mysterious fumes from Ramirez’s body caused the spontaneous epidemic.

On February 19, 1994, the 31 year old Ramirez, who had been recently diagnosed with cervical cancer, fell ill at her home in Riverside, California. Her family comforted her as she threw up in a bowl at her bedside and her condition worsened. In the evening, they called for an ambulance.

Ramirez was brought into Riverside General Hospital’s emergency room at 8:14 p.m., diagnosed with severe cardiac distress. Her blood pressure was perilously low because her heart was beating too rapidly for its chambers to fill up adequately — a condition highly unusual in someone so young.

The hospital staff administered drug treatment and pumped air into Ramirez’s lungs, and when her heartbeat suddenly began to falter, they tore open her shirt to use defibrillation paddles.

At this point, nurse Sally Balderas recalls seeing an odd, greasy film on Ramirez’s skin, like a puddle of oil on pavement. Some witnesses recall a scent similar to ammonia suddenly being perceptible.

Registered nurse Susan Kane drew a blood sample from Ramirez, and she immediately noted a strong odor coming from the syringe. She handed the syringe to respiratory therapist Maureen Welch, who sniffed it and reported an ammonia smell.

Welch in turn gave the syringe to medical student Julie Gorchynski, who observed specks in the blood which have been variously reported as “white crystals” and “manila-colored particles.”

Within seconds of drawing the blood, Kane collapsed. Maintaining consciousness, she complained of burning pains on her face and was taken away on a gurney. Soon after, Gorchynski reported lightheadedness and then passed out. She had severe difficulty breathing and was the most severely affected member of the hospital staff.

Dr. Mark Thomas next felt ill, although he was able to remain standing. Welch was the third to faint, thrashing her limbs involuntarily on the floor. Nurse Sally Balderas experienced a burning on her skin and began to vomit.

Balderas spent ten days in hospitalization, a stay outstripped only by Gorchynski, who remained in intensive care for two weeks. Out of 37 hospital staffers present, 23 reported an affliction of some kind. The total number of complainants would later reach thirty-two.

Dr. Humberto Ochoa, emergency room director, ordered an evacuation of all other patients from the hospital as he took up the effort to save Ramirez. He and three other staffers remained well enough to continue the struggle for the better part of an hour. In fact, Ochoa never felt ill at all, and could smell nothing unusual.

Unable to revive her, Ochoa pronounced Ramirez dead at 8:50 p.m. Her body was sealed in an airtight bag and left for the Riverside County hazardous materials team and the coroner’s office to investigate. But it would yield no easy answers.