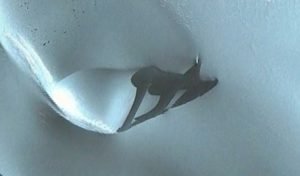 There are a lot of weird things happening in Antarctica. MrMB333’s latest video reveals near the Belgica Mountains in Antarctica a nearly 300 ft wide black anomaly.

This anomaly has a black color, and its structure and shape are distinguished from the surrounding rock formations. What is it?

There’s a lot of debate about what the oddity might be. Some people suggest it’s a lava flow from a volcano that has had several eruptions, referring to the black anomaly’s white plume of smoke.

But it was not possible to find information about any active volcanoes in the area of the Belzhik Range.

Others say the phenomenon looks like a fossilized Pterodactyl, a winged reptile that lived on earth approximately 210 million years ago.

The video continues with another object in Antarctica and appears to be triangular in shape suggesting that it could be a UFO.

NASA is going to remake satellites into “devices for finding aliens”