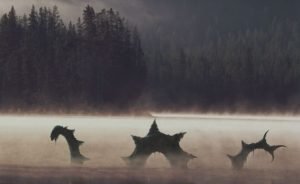 Witnesses have reported sighting Storsjoodjuret in Sweden’s Lake Storsjon from the seventeenth century. What could the serpentine cryptid be?

According to most witnesses, the Storsjoodjuret, sometimes spelled Storsjöodjuret, resembles a long serpentine creature with humps on its back and a small feline-like head with fins or ears on the side of its neck.

The cryptid’s length ranges from 11 ½ to 46 feet; its width is about 4 feet. A minority of witnesses stated it was only close to 10 feet long, with stubby feet, a large head and round eyes.

Is it possible that there are two types of Storsjoodjurets?

The lake, said to be resistant to pollution, is thought to have been created over 9,000 years ago, during the end of one of the Ice Ages.

Storsjon is Sweden’s fifth largest lake, with an area 176 square miles. There are signs of Iron Age villages by the lake’s bays.

The first description of a sea creature in Storsjön was made in a folklorist tale by vicar Morgens Pedersen in 1635. He wrote about a legend that featured two trolls boiling a concoction in a large kettle by Storsjon Lake.

When they boiled the brew for many years, something in the pot started moaning and wailing, then there was a thunderous bang. A creature with a serpentine body and feline-like head jumped out of the kettle and into the lake.

It grew until it was huge and terrorized people who lived by Storsjon. Although the legend reads like a fairy tale, Storsjoodjuret has been sighted by many people.

There are documented reports from 500 people who have seen the cryptid. Many have talked about encounters, but didn’t report them. It’s likely there are people who won’t talk about seeing the monster.

Storsjoodjuret has been sighted, most often, in Storsjon’s bays, during warm months. Sightings of the cryptid in deeper waters are rare.

Anna Rahm observed a gray animal, 9 feet long and with a powerful tail and large ears, at Åssjön on August 12, 1947. Its tongue moved up and down threateningly, and its eyes rolled.

On August 8, 1997, Elin and Cecilia Hemreus saw the animal’s head and one arched loop of its body from only 30 feet away while they were swimming near Tippskar Island. The head was horselike, with two black eyes on the sides; the neck was about 6 feet long. The body had large, round scales like armored plates.

In August 2008, Radio Sweden reported that a documentary movie crew claimed to have filmed The Great Lake Monster. The video, shown on Swedish TV, depicts a fuzzy form that emitted body heat.

In 1986, a law was enacted to make killing, hurting or capturing a living animal like Storsjoodjuret, illegal, but was repealed in 2005.

The most popular theories about cryptid sightings are cases of mistaken identity of a known animal, some type of natural phenomena and that unknown or believed to be extinct species could exist. It’s the same with The Great Lake Monster.

These are slow-moving bottom-dwelling fish. They don’t act like Storsjoodjuret, which moves quickly. Moose, called elks in some parts of Europe, are swimming with their noses above the water. The monster isn’t antlered and swims faster than moose.

Temperatunversion is an optical illusion when a warm layer of air is produced on the surface of the lake and the size of objects is distorted. If they’re branches or trees, the wood is inert and doesn’t swim.

Whirlwinds sucking up water bubbles and moving them across the lake has been suggested. There are no strong enough whirlwinds in the area to move water bubbles.

Species are still being discovered, such as the first megamouth shark discovered in 1976. Since then, only 41 specimens have been found. The coelacanth, a fish, was thought to be extinct until one was caught in the late 1930s.

Since then, schools of coelacanths have been discovered. This theory appears to make the most sense; however the problem is trying to humanely capture a cryptid.

The Daedalus Sea Serpent: Monster That Cpt. McQuhae Saw In the Water