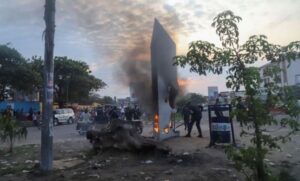 Earlier, we wrote about strange monoliths that appear in different parts of the world. Another such mysterious object was discovered by the inhabitants of Africa. People were so scared that they immediately destroyed it.

The Africans threw stones at the monolith 3.7 meters high and then burned it. According to citizens, the object is associated with the devil. The find itself was made in the Bandal area. Rumors about the mystical origin of the object spread quickly. Some believe that the monolith was abandoned by aliens.

According to resident Serge Ifulu, absolutely everyone was amazed. The design had a triangular shape, and it is often associated with Masons and Illuminati.

To find out what is hidden inside, the inhabitants first smashed the monolith, throwing stones at it. When they found out that the structure was hollow, they simply set fire to it.

Mayor Bayon Gaben made the decision to send a metal sample to the laboratory.

Previously, monoliths were found in the USA, Romania, Ukraine and other countries of the world.