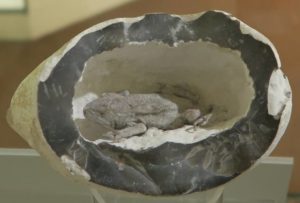 There is no clear explanation for the occasional stone or tree, that when split open, are found to contain an animal, usually a frog or a toad, but sometimes other relatively small cold blooded creatures – very often found alive. The fact seems insane and yet its true. Tibetan Buddhists believe such creatures are prisoners in one of the levels of hell found outside the main circles of hell (as we shall soon see).

In the West the most popular theory is that a young animal wanders into a small hole and then grows too large to crawl out. The hole allows air, water and insects to get in, and thus explains how the animal survives. Yet this theory ignores the vast majority of the cases where there is no visible hole in the stone that entombs the animal. Experts have a way of dismissing unpalatable finds as frauds, hoaxes, evidence of mental instability, or just that witnesses eyes are not to be trusted.

In the later part of the 19th century a venerable lama named Situ Pema Wangyal Rinpoche was making a journey to Lhasa in the company of several friends. One day, much to the alarm of his companions he fell into a wrathful mood and that evening insisted on making camp on a barren plain where neither firewood or water could be found. The next morning, still in a bad humor, he obliged the party to leave the route to Lhasa and to head north to, as far as his companions knew, to nowhere. Since they held him in high esteem though they followed without question. After several hours they came to an enormous outcrop of rock, which Situ announced, it was their duty to break open. Since they had no tools except their wooden staffs, they fared rather poorly at this task.

At this point, the lama took his staff and struck the rock a single blow. It shattered, and revealed inside was a large, repulsive looking creature that the lama gently lifted out and placed at his feet. As the salamander like animal panted for breath, Situ sat down and began to perform a certain yoga on the animals behalf. In Tibetan, this yoga is called pho – wa and is usually described as a transfer of consciousness. It is performed by lamas for the benefit of the dying. After a while, the creature died, funeral rites were performed and the creatures body was burned.

Afterwards, Situ Rinpoche explained that he had liberated the animal, which in a previous life had had a connection to him, from one of the Hells. In Buddhist description of other realms of existence, these occasional Hells lie outside the main circles of Hell and are sometimes encountered in this world. Very often, they are instanced by the enclosure of a living animal inside solid stone.

There are many cases of entombed animals being liberated from solid rock and sometimes even coal. In June 1851 well diggers at Blois, France split open a large flint rock and were startled to find a live toad inside. Another toad was inadvertently freed from a solid lump of ore broken up by miners in Derby England, in 1852. And a Scientific American article in 1853 reported the discovery of a horned lizard alive in a block of stone in New Mexico, USA.

We can also see an example of a wood entombment by looking at a story from South Africa. In 1876 the Uitenhage Times printed an article reporting that a timberman who was cutting a tree into planks came across a cache of 69 tiny toads, each the size of a grape. The toads were confined to a hole in the tree. “They were of a light brown, almost yellow color, and perfectly happy, hopping about and away as if nothing had happened. All about them was solid yellow wood, with nothing to indicate how they could have got there, how long they had been there, or how they could have lived without food, drink or air.”

One of the most peculiar cases involved the discovery of newts encased in chalk! In a lecture given at the University of Cambridge in 1818, Dr. Edward D. Clarke, a geologist, described an unusual find. He had been looking for fossils, he said, and was digging in the quarry at a depth of 270 feet when he came upon a number of fossilized sea urchins and newts. Three of the newts were very well preserved, and Dr. Clarke carefully dug them up and placed them on a sheet of paper.

To his considerable surprise, the newts began to move! Within a short period of time two of the animals were dead, but the third was so lively that he placed it in a pond where it promptly escaped. According to Dr. Clark, the rejuvenated newts were unlike any living at that time and belonged to a previously unknown extinct species.

These finds are truly an enigma, and while some cases may be explained as nothing more exciting than a creature climbing into a hole and growing to large to crawl back out, some cases, like the one above, are simply beyond what science has learned to this date. For example, it is known that a toad can hibernate for quite some time in dried mud. But can it hibernate for millions of years till the soil turns into coal? And as the following case points out, without food?

An hour and a half after stoking his fire, Mr. W.J. Clarke, of Rugby, England, reached over to poke the coals. As he broke open one coal, he saw something move and snatched it out of the fireplace. It proved to be a living toad and it survived for nearly five weeks. It had no mouth and was nearly transparent. Photoraphs of this marvel were offered for sale by the London Steroscopic Company.