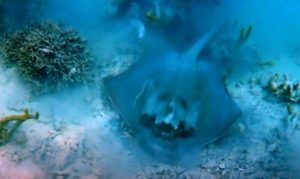 A diver was exploring the reef around the island in the remote waters of Tonga off the island of Vava’u when he came across a southern stingray eating something in the sand, reports ufosightingshotspot.blogspot.com.

But what he saw immediately caught his eye as it appeared that the stingray had a clear image of a devil or ghostly monster face on its back.

The diver was surprised at how clear and vivid the image was and he first wondered if it was simply the result of sand and dust stuck on the stingray’s skin.

As the scuba diver approaches to record this strange creature, it turned and sway away to resume its hunting in another path of sand.

Although it is obviously not an evil creature, it does not take a lot of imagination to see this as a ghoulish devil face cruising over the ocean bottom.