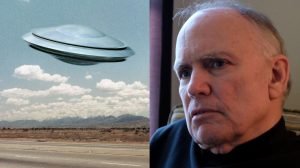 Paradigm Research Group (PRG) leader Steve Bassett is the only lobbyist for openness in the “alien case” and UFOs on Earth. According to Bassett, many researchers believe that the aliens shared “anti-gravity technologies” with the US government. Therefore, if this fact is made public, the end of the fossil fuel economy will come.

Bassett is convinced that the US government has been secretly working with these technologies since the middle of the last century, but in the deepest secrecy. This approach is linked to concerns about religion, the rule of law and the economics of minerals.

Acvcordint to politico.com, Bassett is Washington’s only registered lobbyist pressing the federal government to acknowledge “an extraterrestrial presence engaging the human race,” as his disclosure filing puts it. He came to Washington in the 1990s but soon realized that it wasn’t easy to persuade lawmakers or even congressional staffers to take meetings to discuss UFOs.

So Bassett embraced a strategy that more conventional lobbyists have also adopted over the past decade or two. “I said, I’m not going to spend time talking to some intern in some office on the Hill,” Bassett said. “I’m going to lobby the media.”

The PRG researchers say they know the reasons why the US authorities are hiding information about UFOs. If the UFO data is revealed, the entire world economy will collapse, they said.

Bassett added that all so-called “flying saucers” do not use oil, gasoline, gas or coal. “They have a different energy system. Without a doubt, a much more complex and deep system based on anti-gravity,” he said.

“Some programs have been removed from the jurisdiction of the White House and Congress and are working somewhere very, very deeply, in a “black manner,” the researcher emphasized.

“I can assure you that when the head of state finally admits this fact formally and presents evidence, people will start to worry and want to know more.”

But even if the economy stops developing in the current way, it will have new opportunities, the expert believes.

Thus, Bassett and many others say that the evidence for the existence of UFOs is absolutely true and convincing.

Asteroid Bennu does not allow the American probe to land