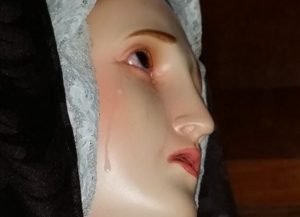 During a New Year’s Eve service, congregants at a church in Mexico were shocked when they realized that a statue of the Virgin Mary had apparently started crying behind a locked glass case.

The unusual scene was allegedly unfolding in the town of Cerro Armadillo Grande at the chapel of San Antonino Obispo.

As is often the case with such possibly miraculous events, word of the uncanny event soon spread across nearby communities and people started to flock to the church to pray at the crying statue.

One witness hypothesized to a local media outlet that the weeping statue could be a sign that “something will happen” and showed concern that “it is a warning from heaven for disobedience to the Law of God.”

This thought was repeated by another person who traveled to the church to see the statue and thought it was a message ‘ from above ‘ that he hopes “will not announce disasters.”

Bu not everyone was sure that a supernatural event took place at the church as a number of online viewers in Mexico reacted to the weeping statue’s media coverage by calling it a hoax.