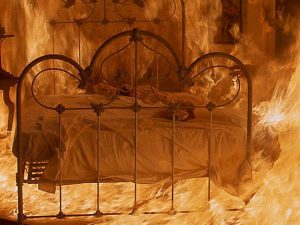 The mere notion that a human being has the potential to burst into flames without the help of an external ignition source seems too ridiculous for study.

Surely there is nothing inside the body that could create such a reaction? And yet, for over three hundred years, reliable records have testified to a phenomenon where people, with no prior warning or exposure to naked flames, simply combust in a fit of intense heat.

All that is left is a pile of ash and perhaps a random charred limb. The fact that no damage ever seems to be done to nearby textiles leaves experts perplexed. This inexplicable phenomenon is called spontaneous human combustion.

This is now largely discredited, but there are some common qualities in occurrences of spontaneous human combustion. Generally, it is the trunk of the body that is most severely burnt, and frequently a couple of smouldering, blackened feet are found where the person should have been. Similarly, arms, skulls and even spinal cords are often the only distinguishable remains.

The actual damage to the bodies affected by spontaneous human combustion appears to be created by a heat more intense than even that of a crematorium.

A universal theme of spontaneous human combustion occurrences is that despite this extreme temperature – which experts believe is probably around 600°C – objects or material around the person are not destroyed, although obviously their clothing is burnt, and sometimes there is a patch of scorched carpet where their feet would have been.

In one case, a woman died following an incidence of spontaneous human combustion in bed and the sheets were not even marked. However, occasionally a greasy, sooty dust is found on ceilings and walls nearby.

Spontaneous human combustion was recorded in 1673 by a Frenchman, James Dupont, who studied a selection of cases of the phenomenon in his book, De Incendiis Corporis Humani Spontaneis.

Dupont’s interest in the subject was initially aroused by the Nicolle Millet court case. In this instance, a man was found not guilty of murdering his wife because the jury ruled that she had actually suffered an attack of spontaneous human combustion.

From the late seventeenth century the idea of spontaneous human combustion gained credence and acceptance in popular life. Indeed, Charles Dickens used the phenomenon as the reason of death for a character called Krook in his 1852 novel, Bleak House.

The most celebrated case of spontaneous human combustion happened on 2nd July 1951 to a 67-year-old pensioner from Florida, USA called Mary Reeser. The only parts of Reeser’s body to be found were her skull, which had shrunk to the size of a baseball, her spinal column, her left foot, and a pile of ash still in her armchair. The authorities declared she had died in a normal household fire, but no part of her apartment, including cotton sheets and a pile of newspapers left nearby, was damaged.

A similar event occurred recently in France. On 17th November 1998, the few remains of a 67-year-old woman called Gisele were found in her farmhouse near Honfleur. Only a pile of ashes and her slippered left foot were discovered.

In this case, even the wheelchair in which she was sitting had disintegrated, although the rest of her farmhouse stood untouched by fire. In such cases, police investigators can only take a guess or choose the most plausible option given the seemingly inconsistent facts.

Spontaneous human combustion investigators themselves have no satisfactory explanations. The alcoholism and anger mixture has no scientific grounding and the suggestion that it is caused by excessive fat deposits that catch alight is also dismissed, whilst the idea that spontaneous human combustion is caused by some error in the body’s electrical system is unverifiable.

Perhaps the most acceptable explanation for the time being is that spontaneous human combustion is caused by an Act of God. Although that can have no easily studied scientific basis, for now it is the most reassuring answer to a mystery that truly is inexplicable.