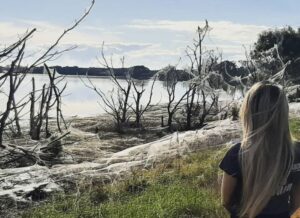 The Australian region of Gippsland in Victoria these days looks like the scenery for a horror movie: everything around is shrouded in huge masses of cobwebs.

This often happens all over the planet, but the phenomenon always causes vivid reactions on social networks due to its frightening beauty.

Scientists are asked not to use insecticides against spiders – these animals are an important part of the ecosystem. Most often, they weave a web to catch food for themselves, but in this case, it is rather a distress signal.

After heavy rains and floods that took place in Gippsland, the soil became too wet, and the spiders, hiding under the ground and leaves, flee.

The spider releases a long strand, the wind catches it and clings to the nearest object, and so the animal can move upward.

After the arthropod is safe, it will find a suitable shelter for itself, stop producing excess silk and return to its usual way of life, and the web will collapse after a couple of days under the influence of the forces of nature.

In recent days, weather disasters have been observed in Australia, and it is for this reason that spiders are forced to look for a new place to live.