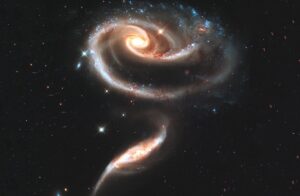 In recent years, space exploration has been progressing by leaps and bounds. For example, by making a map of dark matter, scientists have managed to reveal another mystery of galaxies.

It turned out that they are interconnected by hidden structures. In the new local universe map, these hidden “bridges” are already indicated, reports Phys.

The map, made with machine learning, may also shed more light on dark matter’s influence in the evolution of our universe, participating scientists said in a statement from Pennsylvania State University.

Dark matter represents roughly 80% of the matter in the universe, but it, along with dark energy, is poorly understood. Dark matter is invisible in wavelengths of light, so it can’t be seen with telescopes. However, scientists can chart the influence of dark matter’s gravity on large cosmic structures, such as galaxies.

“Because dark matter dominates the dynamics of the universe, it basically determines our fate,” study co-author Donghui Jeong, an associate professor of astronomy and astrophysics at Penn State, said in the statement.

“We can ask a computer to evolve the map for billions of years to see what will happen in the local universe. And we can evolve the model back in time to understand the history of our cosmic neighborhood.”

Typically, researchers do it by running large computer simulations, starting with a model of the early universe and fast-forwarding through billions of years of expansion and evolution of visible matter, filling in the gravitational blanks to figure out where dark matter was and where it should be today.

“Having a local map of the cosmic web opens up a new chapter of cosmological study,” said Jeong. “We can study how the distribution of dark matter relates to other emission data, which will help us understand the nature of dark matter. And we can study these filamentary structures directly, these hidden bridges between galaxies.”

For example, it has been suggested that the Milky Way and Andromeda galaxies may be slowly moving toward each other, but whether they may collide in many billions of years remains unclear. Studying the dark matter filaments connecting the two galaxies could provide important insights into their future.