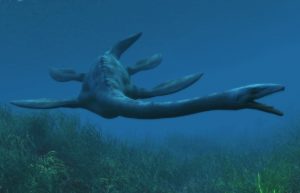 The winner of a local name the monster contest dubbed her South Bay Bessie. Monster Mania began among the local communities in the mid 1980s. The cryptid has been seen in the United States and Canada.

Tom Solberg, owner of Huron Lagoons Marina, is a member of a group that has offered a $100,000 reward for anyone who can deliver Bessie to them, unharmed and alive. As of December, 2009, no one had claimed the reward.

Bessie has been sighted numerous times by and in Erie. The majority of reports say Bessie is a greyish, brown or black serpentine creature about twenty-five to forty feet long and at least twelve inches in diameter.

According to an 1898 Sandusky, Ohio Daily Register newspaper account, it’s hideous and can live in water or on the land.

In 1912, the Daily Register printed a story that Kellys Island residents had an encounter with a huge sea monster that broke through the ice and swam toward shore.

It was black, had a gaping mouth, large head and a row of teeth. The article was dated April 1, 1912 – April Fool’s Day.

The newspaper’s July 22, 1931 edition had a story about the monster being captured in Sandusky Bay. Two visitors from Cincinnati were in a rowboat when they saw the creature. They clubbed it, brought it into their boat and put it in a crate.

Curator of the Cleveland Museum of Natural History Harold Madison went to Sandusky to examine the animal. He said it was an Indian python.

The men from Cincinnati had already left town in a hurry. An investigation revealed that one of them had family in Sandusky and worked for a traveling carnival.

There have been many sightings of South Bay Bessie over the years, including the following reports of the cryptid.

1960 – Ken Golic was fishing off a pier in Sandusky when he saw a cigar-shaped creature.

1981– Theresa Kovach, when she was in a house on the Cedar Point Causeway, watched a large snake-like reptilian gamboling in the lake.

1983 – Mary M. Landoll saw Bessie before dawn by Rye Beach in Huron. The cryptid was greenish-brown, about forty to fifty feet long, had a long neck and seemed to be grinning. She appeared to be playing in the water.

1985 – Tony Schill was boating with friends north of Vermilion when they sighted the serpent. It was dark brown, had a flat tail and five inch humps. Dale Munro was in a boat by the Lorain Coast Guard Station when he encountered an estimated thirty-two long black entity that had three humps.

1990 – Susan Seeson witnessed the creature two miles from Cedar Point. Bob Soracco was jet skiing off Port Clinton when he saw a huge porpoise-like animal with grey spotted humps. The Harold Bricker family was fishing north of Cedar Point Amusement Park when a serpentine creature swam by their boat. It was about thirty-five feet long and had a head like a snake’s. Huron fire inspectors Jim Johnson and Steve Dircks saw the cryptid they described as dark blue or black, about thirty to forty-five feet long and having three humps.

The prevailing theory is that Bessie is a species of a sturgeon. Prehistoric sturgeons could weigh three hundred pounds and grow to twenty feet in length.

The counters to this are that they are bottom-dwellers who rarely surface and that many eyewitnesses claim they did not see a fish.

The general theory about lake monsters is that they are a species of dinosaurs that survived extinction.

There are two animals that didn’t become extinct with their contemporaries, the tuatara and coelacanth. Will lake monsters join their ranks if one is captured or killed?