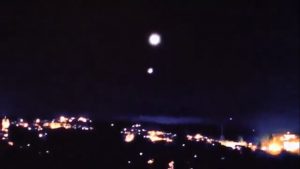 On June 26, the equipment of the Brazilian meteorological station BRAMON recorded a certain meteoric rain, during which at least 9 meteorites entered the atmosphere. It is also worth noting that the objects moved to the ground surprisingly parallel to each other.

Two days later, on June 28, the surveillance cameras filmed the strange falling object that is presented in the video below.

Mysterious falls continued on July 11th. That night, a luminous object of circular shape reappeared in the sky. Later several more UFOs flew out of it.

Something similar earlier, July 3, was filmed in England, and July 6-10 – in the United States, in Florida. Oddities have become more frequent around the world, and, moreover, especially many anomalies began to appear over Brazil.

According to some prophecies, it is Brazil that will become a kind of ark after the end of the world.

Monolith and mysterious tunnel at the landing site of Apollo 17