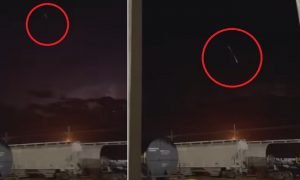 A few days ago, a resident of Texas named Connor filmed something strange during an overnight thunderstorm that fell to the ground from the sky at high speed (see video below).

Connor was on duty on the night shift at a meatpacking plant in Amarillo when a severe thunderstorm began. He came up with the idea to go outside and try to photograph the sky, illuminated by lightning.

“I can’t say I’ve seen anything like this before, I’ve never filmed the sky or anything, but on the day that the storm was raging, I really felt the need to make a video,” he says.

When he was watching the video on his phone, he noticed how at some point something elongated and white swept at great speed from top to bottom.

To get a better view of this moment, he needed to greatly slow down the video, but even then he could not understand what exactly fell from the sky.

The meteor seemed the most logical version to Connor, but he does not exclude that it could also be a UFO. Alas, he did not write anything about whether he went in that direction to see on the spot what might have fallen there.

When he posted the video online, many users agreed with him that it looked like a meteor, but others began to suggest that it was some kind of lightning or other air anomaly.