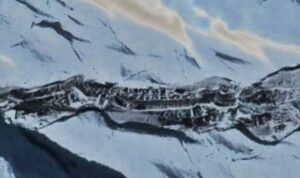 Something Huge located between Prince Olav Coast and Prince Haraid Coast is melting out of the Antarctic Ice Sheet, reports ufosightingshotspot.blogspot.com.

An enormous structure hidden under the ice sheet of Antarctica has become visible possible due to climate changes.

The structure which is not something natural or a crack in the ice sheet is 300 meters long, width measures between 30 – 50 meters, including huge walls and a tower of 10 meters high.

Does this find prove once again that once there was an ancient civilization in Antarctica, the mention of which, unfortunately, has not been preserved in history? Or maybe this find is not old at all?

Or is it something extraterrestrial?

Antarctica is very often the subject of conspiracy theories, with so-called seekers of truth claiming that traces of everything from ancient civilizations to Nazi bases lie beneath the layer of snow and ice.