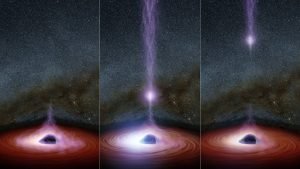 Black Holes still remain as a subject of much confusion even among distinguished scientists and researchers. Every time we get close to unravel its mystery, it presents us with more confusing questions.

You don’t have to know a whole lot about science to know that black holes typically suck things in, not spew things out. But some time ago NASA spotted something mighty strange at the supermassive black hole Markarian 335.

Now, why is this so intriguing? The answer is that Black Holes are known to have very strong gravitational pull, so much so that it doesn’t even let light escape it.

Two NASA satellite telescopes, including the Nuclear Spectroscopic Telescope Array (NuSTAR), witnessed a black hole’s corona being “launched” away from a supermassive black hole. Then a huge burst of X-ray energy emitted. So, what precisely happened? That is what scientists are currently trying to understand.

“This is the first time we have been able to link the launching of the corona to a flare,” Dan Wilkins, of Saint Mary’s University, said. “This will help us understand how supermassive black holes power some of the brightest objects in the universe.”

Fiona Harrison, NuSTAR’s primary investigator, stated that the nature of the energy source is a “mystery,” but that the ability to actually capture the event should offer some indications about the black hole’s size and structure, as well as (hopefully) some new insight into how black holes work. This black hole, fortunately for us, is still 324 million light-years distant.

Black hole is a place so bleak that even the laws of physics break down there. But what if black holes aren’t so forbidding? What if they are instead some kind of intergalactic stargate, or maybe even a passageway into a whole other universe?

It may sound like the premise for a clever science-fiction movie, but new calculations by quantum physicists now suggest that the stargate idea might actually be the better theory.

According to the startling new results, black holes do not culminate in a singularity. Rather, they represent “portals to other universes,” reports New Scientist.