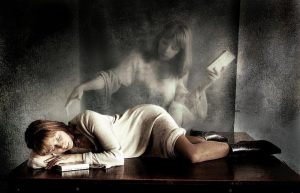 OBEs, in a strict sense, are fascinating phenomena, but I also find the states that occur immediately before and after them to be full of interesting phenomena in themselves. The events that occur in these pre- and post-OBE states have received some attention over the years, including in sleep laboratories, but probably deserve closer study by those who experience OBEs under regular conditions. Such is the focus of this article.

Imagine a very cold winter´s day. You have to get to work on time but the old car needs the usual warm up time. So, as part of the morning routine, you run out and start it. When you next leave the house you hear the engine running at high idle, a very excited state for that engine. When you get in and give the accelerator a gentle tap the engine settles down. After a few seconds of audio perusal you decide that it´s okay to shift gear and drive to work, ready for another exciting and productive day. Perhaps !

Consider, for a moment, your body to be like that racing engine. During the day it works faster so you can deal with your secular affairs. After all, it is designed to work best in the physical world. But there comes a time when you need to rest. The physical organism has to slow down to rekindle its fires, so to speak, to re-equilibrate itself. The ego needs to recharge, also. Thus, you may find yourself lying down for a nap or a night´s sleep.

Many sources indicate that the difference between the physical and astral worlds is simply a matter of vibration. So, when you rest you tap the pedal, so to speak, and change the frequency you´re adjusted to. Whether you induce it or not, it is possible to follow the relaxation of the body and mind before you drift off to sleep. Most often you pass through this stage quickly or completely unaware of it. The relaxed state can certainly be maintained for some time with an awareness that can range from vague to keen. Indeed, some people may actively shun sleep for a while and become acute observers at this stage, aware of both internal and external phenomena. Many people would consider this to be the hypnagogic state, a condition in which the mind plays tricks on you, in which it can be hard to tell what things are really happening and what is producing them. Many would also say that the sensations are produced by the mind in a state of diminished awareness and cannot, therefore, be trusted as bona fide. This may be true in many cases but some sensations and experiences can be clearly linked to OBEs.

Commonly, this relaxed state of awareness comes over me suddenly, and it feels as if all the muscles in my body relax at the same time. It actually seems like things get quieter at that moment. The change is so profound that I instantly take notice. It´s a wonderful feeling. In fact, it feels exactly as if vibrations have slowed down inside of me. I become more aware of what is happening inside and out. My senses seem heightened and sometimes I can feel pulses of energy move up and down my body like waves of water. I feel like I am floating inside my physical body, as if I were on water. Often the pulses are weak to moderate. Sometimes they are strong. At other times they are barely noticeable. During this stage my physical sensation of the body disappears but I am always aware that I am resting within it and that conditions favor an OBE. However, I often hold this state for some time to observe what is happening in more detail. But there are other times when this stage passes very quickly.

There is a set of sensations that I have been aware of since fourteen years of age. It is commonly reported by others in OBE literature as a rushing or wind-like sound. My version is rather typical. The vibrations become quite intense and, usually in an abrupt fashion, build up in a crescendo-like manner to the point where it is almost painful. It seems that my entire body and mind are engorged with the noise and vibrations. At this point paralysis has set in. It is from this state that the OBE starts. But, I am often able to maintain this state of rapid vibration and still think clearly. Sometimes I can even control the resonance, making it move up and down or spread evenly throughout the body. This is reminiscent of awakening Kundalini in the body. Notably, I have found that I can help control or even break this state by moving my eyes or jaw back and forth. These sensations are fairly well known in OBE literature. In my case they occur at the end of the relaxed state.

There are other sensations, most notably sounds, that I have noticed. Some of them may seem rather strange at first regard. The nature of these sounds may be linked to one´s own personality, experiences and associations. In one case, at the culmination of the intense vibrations, I heard a sound that I instantly associated with a paper bag being slowly torn. In fact, while it was happening, I was able to rationalize that it reminded me of a lightweight bag, very unlike a grocery sac. The analogy of the tearing paper with the release of the astral body is obvious. Under the same conditions I once heard a loud bell, like a fire bell at a school.

Some sounds seem to be noticed more easily in the relaxed state, that is, before any increase in vibrational energies. As an example, in such a relaxed state, I once heard a buzzing sound and wondered what someone was doing flying an ultralight plane at this hour. It was 1:15 a.m. In some instances I have been aware of voices at a distance. One time they were in another part of the room. At another time they came from outside the house about twenty feet above the ground. I listened as carefully as I could but details were impossible to pick out. But, in both cases, they simply seemed like ordinary conversations between two or three people, the kind you might barely hear as you passed them on a busy sidewalk. In one case I heard a distinct, low intensity, ringing sound. On some occasions I have heard music which seemed to come from a distant location. It was very much like a choir but of a quality I am unable to describe. It is perhaps the most beautiful music I have ever heard and the effect was to deepen my relaxation.

A few times, upon returning, I have had some interesting experiences. Once, I felt an extreme jolt in the back of the neck. I was quite aware of this happening as well as the painful muscles I had for the next few days. Another time, I heard a soft, explosive sound when returning.

There are a few visual experiences that are of interest. Typically, during the relaxation or vibration states, I have noticed that everything in the room seems to be giving off its own light. It´s neve r overwhelming but bright enough to see by. The lighting of the room most resembles a moonlit night at full phase. Usually, the color is a soft blue or green. One time, in the relaxed state with eyes closed, I found myself looking at three rows of four lights. Soft and green, I slowly became aware that I was moving my attention from one to the other, left to right, in each row. By the time I was near the end of the second row I felt the vibrations commence. Perhaps this was a way of getting to that point. Once, while maintaining a mild vibration, I had my eyes closed but was careful to make observations. In front of me, with eyes still closed, I could see a swirling tunnel of blue mist. At the far end was a small, dark opening. The scene was spellbinding and it was superposed over the normal room fixtures. I managed to gain a clear focus on the scene three times, especially the dark opening.

The above experiences relate a few of the more interesting phenomena I have found to occur immediately before or after an OBE. Are they artifacts of reduced sensory input ? Perhaps they are. Maybe, when we turn our attention away from the restless world, we are more open and aware of other experiences that are happening all the time, in the background. While I believe the OBE to be real and objective I think that the pre-OBE and post-OBE sensations might be a mix of objective and subjective experiences. In the latter case they may be embellished by one´s own experiences and expectations.

For example, the rows of light s episode seems to be a way to get to the vibration stage and the tearing paper bag is analogous to dissociation itself. The bell, ultralight and ringing sounds seem to be an indication of the immanent OBE. Other sensations seem more objective in nature to me since they are so widely reported. I believe the rushing sound, the controllable vibrations, and the sometimes painful effects of repercussion are examples of this other category. General, low intensity light emanating from objects has been reported by many OBEers which suggests that it might also be objective. Other phenomena are more difficult to place. These include the music, voices in conversation and the tunnel experience. With me, at least, sounds seem rather noticeable.

By Bob Lepak and Alfred Ballabene

How to Protect Yourself and Recover From Psychic Vampire Attacks