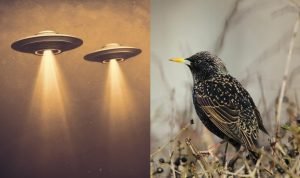 Nick Pope is one of the most well-known personalities in the subject of UFO research. From 1991 to 1994, he worked for the British Ministry of Defense, where he was entrusted with researching reports of unidentified flying objects to see if they represented a threat to national security.

Pope recently said to The Mirror that if an intelligent alien civilization wanted to watch human actions on Earth without arousing suspicion, all they had to do was disguise their surveillance equipment as ordinary sorts of animals that no one would notice.

He urged people to be distrustful of some birds or insects.

Nick said: “If aliens want to hack into and control a living organism, or construct a drone that’s a perfect mimic, it would be best to choose something ordinary and ubiquitous, like a seagull or a housefly.

“Something you wouldn’t normally pay much attention to, perhaps.

“But all the time, it would be spying on us, recording everything, and sending information about us back to the alien homeworld.”

He added: “If aliens are secretly monitoring Earth, they’ll be doing it up-close-and-personal – not with distant telescopes, but a way that would enable them to get crystal clear images and recordings, right under our noses.

“Any civilization capable of getting here from other star systems undoubtedly has technology that would seem like magic to us, and one possibility is that they might be able to implant a living creature with tiny cameras and recording devices, and then control its thoughts to position it anywhere of interest.

“A related alternative would be to construct drones that are indistinguishable from an animal, a bird or an insect. If that sounds like science fiction, it isn’t.

“People have probably seen on the internet some images of insect-like drones that spy agencies allegedly use.”

Astrophysicist explained the complexity of the search for extraterrestrial civilizations